A Call For Closer Ties With Africa 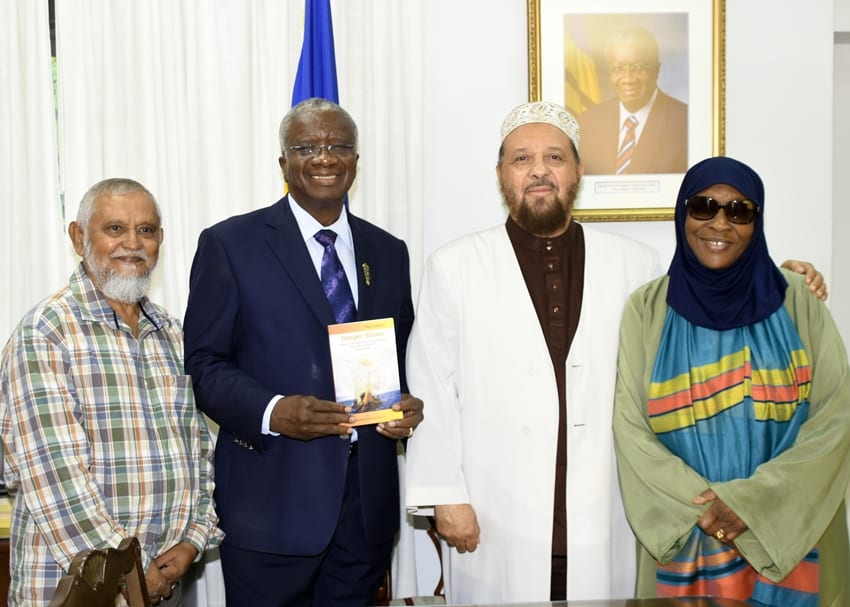 (L-R) Authors Sabir Nakhuda and Dr. Abdullah Hakim Quick along with wife, Kareema Quick pose with Prime Minister, Freundel Stuart after the presentation of their book “Deeper Roots – Muslims in the Americas and the Caribbean from before Columbus to the Present”. (C.Pitt/BGIS)

According to him, the links were already there and it was now necessary to build on them. “There is more that unites us than divides us,” Mr. Stuart said recently, when author Dr. Abdullah Hakim Quick, an African American with Caribbean roots, paid him a courtesy call at Government Headquarters.

Dr. Quick also presented the Prime Minister with a copy of his book Deeper Roots – Muslims in the Americas and the Caribbean from before Columbus to the Present, in the presence of his wife, Kareema Quick, and author and researcher Sabir Nakhuda.

During the discussions, Mr. Stuart underscored the importance of persons learning their history in an effort to understand themselves better.

“Too many believe the past is not important and the ‘here and now’ is what counts. That has led to a lot of frustration, insecurity and eventually disillusionment and resentment. We see it played out in our societies in very costly ways,” he indicated.

The Prime Minister lauded the author for Deeper Roots, saying it was timely and necessary. Dr. Quick responded that such works were written to encourage the youth and help them develop certain important qualities to deal with the challenges they were facing.

While on the five-day visit, Dr. Quick, whose grandmother migrated to the United States in 1917, searched the Archives Department to learn more about his ancestry.

Dr. Quick is a graduate of the Islamic University of Madinah, Saudi Arabia, and holds a M.A. degree and PhD in African History from the University of Toronto, Canada.