CMO: Blindness A Complication Of Diabetes 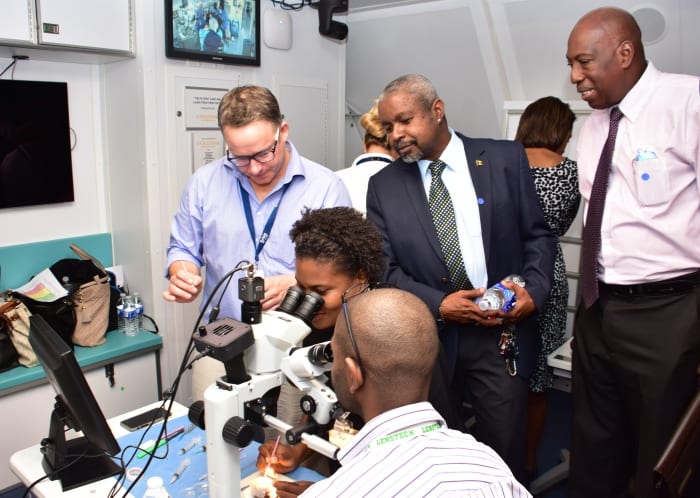 As the prevalence of diabetes increases in the Barbadian population, so do the complications which affect the eyes. These complications include cataract, diabetic retinopathy and neovascular glaucoma.

Dr. George told his audience that the benefits of Orbis International holding the conference in Barbados were numerous, since the two-week training seminar would focus heavily on sensitising Barbadians about glaucoma and diabetic retinopathy.

He further noted that a large group of local and regional professionals would benefit from continuing medical education and training including ophthalmologists, nurses, optometrists, anaesthesiologists, biomedical engineers and other allied eye health professionals.

He added: “In doing so, we will be able to build greater capacity within our polyclinic system, in addition to the Queen Elizabeth Hospital (QEH), to enhance our ability to deal with these lifestyle-related eye diseases.”

The Chief Medical Officer described the QEH as the only eye care facility of its kind in the Caribbean which had garnered a stellar reputation for the delivery of superior ophthalmic care. The training afforded by the conference, he said, would allow for further expansion of the Department of Ophthalmology’s capacity to deliver care to its patients.

Highlighting the $6 million refurbishment of the Department’s outpatient clinic, Dr. George said this provided expanded capacity for an average of 20,000 patients per year, adding that the number continued to grow.

He said the Ministry of Health was committed to building a healthcare system which addressed the promotive, curative and rehabilitative aspects of eye care; and which engaged the public by providing information to raise public awareness of the preventable causes of blindness and visual impairment.

He concluded: “I hope that through this partnership with Orbis International, we can begin to better address this issue, and build greater capacity in Barbados and in the Caribbean. It is my further hope that this regional ophthalmic training conference will be the first of many to be held in Barbados.”