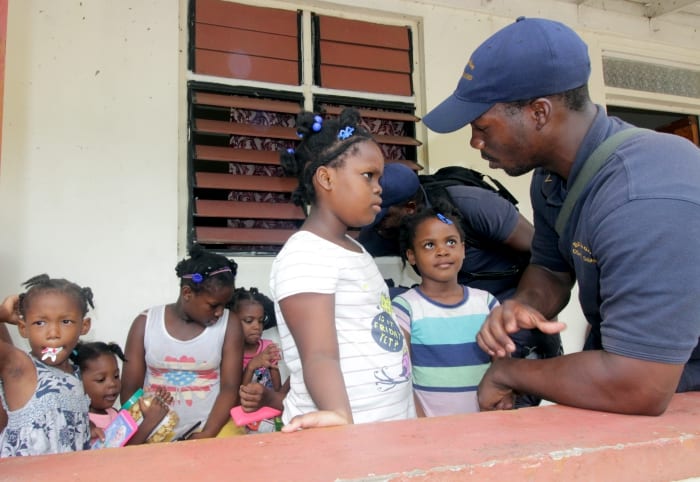 These Coast Guard officers chatted with children while assisting in Dominica following the passage of Hurricane Maria. (M.Elcock/BGIS)

For the past few weeks, the men and women of the Barbados Coast Guard have sacrificed time with their families and national duties to venture into the unknown in Dominica, all for the love of country and others.

For the crew of the HMBS Rudyard Lewis, that sense of national pride was strong as they banded together as a “family” to execute the selfless mission of ferrying much-needed relief supplies between Barbados and Dominica and looking after matters of national security in that country.

The crew, under the command of Lieutenant David Harewood, spoke to a team from the Barbados Government Information Service as they returned from a mission to the Nature Isle, following the passage of Hurricane Maria.

“It is because of the pride of the job and the fact you are representing the nation that drives the crew. Leaving their families at home is hard, because their families themselves are worried. However, [our] families encourage each and every one of us so that when we go forward to do this job we know there is still someone out there who cares. That drives the crew more and more,” he said.

However, leaving their families behind was not the only concern for the team. Lt. Harewood explained the 15-hour journey on board the Rudyard Lewis and seeing the devastation left behind by the hurricane was mentally and physically taxing as well.

“Some of the crew members were there in 2015 for Erika and seeing the devastation that took place [this time], touched them and drove them to be more reactive to helping the citizens of Dominica,” he explained.

However, it was not an easy task for the crew who were greeted by a disturbing sight as the Rudyard Lewis approached Dominica, one that set the tone for what was to come.

“As we were approaching the pier, everyone was on the deck. We knew we were going to a disaster area, but then we were met with a very gruesome sight,” recalled Petty Officer, Edmund McCollin.

That sight was the body of a man floating in the waters of Dominica. But, he said, “as bad as it was, it drove the men because they knew they had to fulfil their role”. 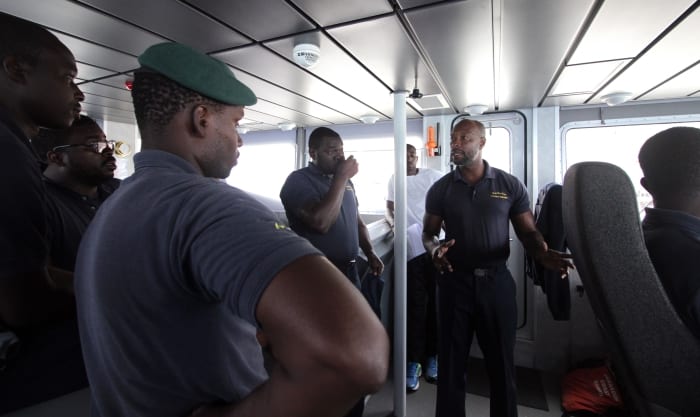 As Coxswain of the vessel, Petty Officer McCollin explained that his role was to look after the welfare and morale of the crew and the maintenance of the ship in terms of cleanliness and its general upkeep.

However, he admitted that keeping up the morale of the crew could be challenging at times. “You are taking the crew away from their family for extended periods and thrusting them into a disaster situation, so you don’t know what to expect or how you are going to cope with it, so you have to be prepared mentally so that you can deliver the required aid,” he said.

For Small Boat Coxwain, Andre “Bill” McClean, it was not an easy mission. “It was my first rescue mission of this size and I can’t find the words to describe what I experienced down there. When I first got there it was like a movie. Pictures can’t really tell how it was, but it was really hurtful… to see the kids and the pregnant ladies,” he recounted.

However, he noted that mentors such as Petty Officer McCollin helped him through the difficult times.

Meanwhile, Senior Engineer on board the vessel, Able Bodied Seaman, Renalda Grosvenor, recalled the faces of those he encountered as he did foot patrols daily in Dominica as part of his mission to maintain the levels of security to safeguard the country’s national interest.

“I saw people on the streets looking for water. More than once I saw a young boy getting water from a nearby stream. Over time while on patrol I got familiar with his face. He was the only one in the household able to get supplies back to his pregnant mum,” he explained.

For him, being away from his family was difficult, but he took comfort in the fact that they were understanding and he had the support of his extended family. 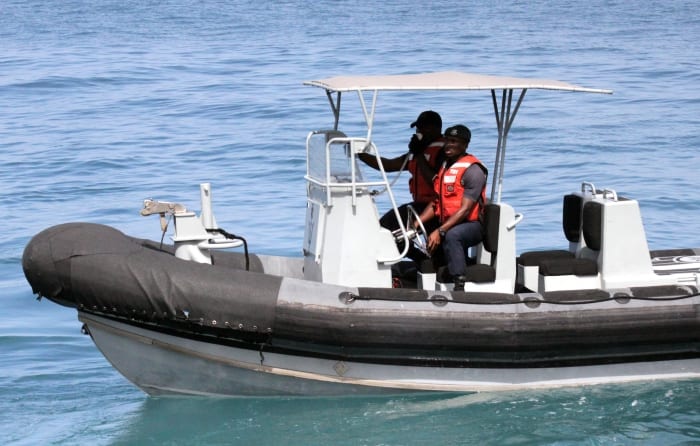 Members of the Coast Guard preparing to visit one of the heavily affected areas in Dominica by sea. (M. Elcock/BGIS)

The feeling was the same for Navigation Officer on board the vessel, Sub-lieutenant, Cayle Francis-Thornhill. “The time away is a challenge. One of the difficulties is when things go wrong here in Barbados most people have opportunity to go and ensure everything is fine. We get that opportunity, but immediately after, we have to deploy… The rotation became arduous [but] fun because of the people you work with,” he said.

He explained that in the immediate aftermath of the hurricane, the vessel would return to Barbados the morning and re-deploy back to Dominica the same evening.

His role on the mission was to safely navigate the HMBS Rudyard Lewis between Barbados and Dominica. That involved preparing the chart work to determine how the vessel would get there so the entire team would know how to operate safely.

Meanwhile, having the correct nutrition is an important part of every voyage, and Ordinary Seaman, Horace Bailey, takes his role as cook very seriously.

Mr. Bailey explained that the time spent preparing meals and what was cooked on any given day was determined by the number of people to be fed and sea conditions.

“The earliest I would get up to cater for 80 to 90 people would be around 3:00 a.m.,” he said, adding that breakfast on board the Rudyard Lewis could consist of scrambled eggs, cream of wheat, oats and luncheon meat.

The Ordinary Seaman stated that he had a duty to ensure that the members of the crew were eating well and they received morale boosters on a regular basis.