A member of the Barbados Coast Guard explaining aspects of the HMBS Trident to primary and secondary school students during a tour today. (S.Maughan/BGIS)

The Tsunami and Earthquake Smart Month celebrated in March has taken on a new name from this year.

The month of activities, traditionally used to highlight earthquake and tsunami hazards, will now have a broader focus under the new name – Coastal Hazards and Earthquake Smart Month.

Director of the Coastal Zone Management Unit (CZMU), Dr. Leo Brewster, explained that the change was made to reflect a recognition of the wider set of hazards that threaten the island’s coastlines.

“While there is acute awareness of the powerful threat of tsunamis, we must also consider more frequent hazards such as storm surge and winter swells, which can be devastatingly destructive to property and livelihoods,” he said.

Dr. Brewster was speaking during this year’s launch of a month of activities being celebrated under the theme: Safety and Security of the Blue Economy at the Barbados Coast Guard’s (BCG) HMBS Pelican base today.

He noted that the coastal zone was a vital area for Barbados – environmentally, economically, socially and culturally.  He added that it underpinned the tourism sector, which was Barbados’ main economic earning, and was a source of livelihood for many coastal communities. 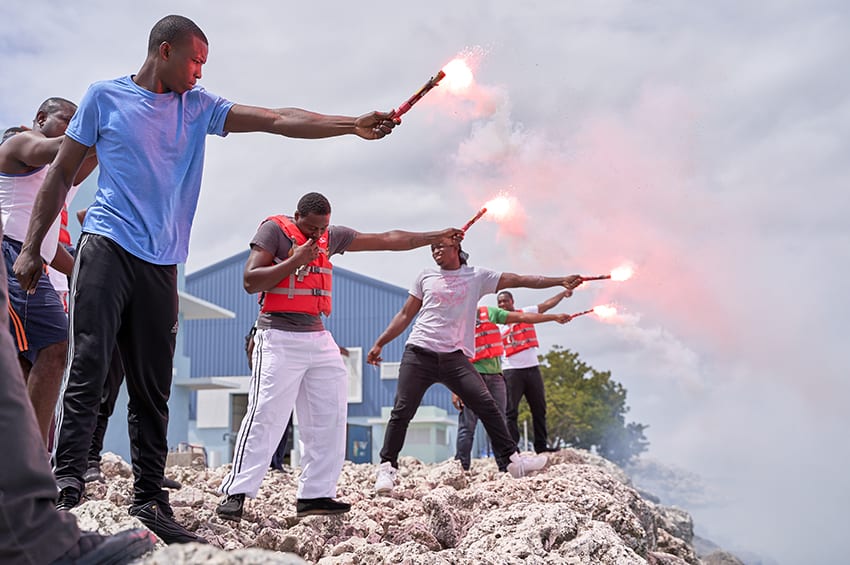 A regional team training in order to qualify to work on a cruise ship putting their new knowledge in lighting a flare to the test. (S.Maughan/BGIS)

However, he pointed out that from a resilience perspective, there were many factors within the coastal region that influenced the vulnerability of the country to the impact of hazards.

“Most of our critical national infrastructure such as power generation, fire response and medical services are located along or near to the coast making them also vulnerable to the impact of coastal hazards,” the Director said.

He added that the ecosystem services, such as coral reefs and mangrove forests that form effective natural protection against hazards impacts, especially those caused by wind hazards, were also taken into consideration under the coastal zone.

Speaking to primary and secondary school students, Dr. Brewster said the development of the blue economy must, therefore, be grounded in a resilience perspective that mitigates risks, ensures that there are sound preparedness and response mechanisms, including robust early warning systems; and positions key sectors to recover quickly from any disaster.

Today’s opening ceremony was followed by an open day where students were allowed to tour the BCG Pelican Base and the Trident. They also had an opportunity to tour various booths, which highlighted various aspects of disaster management, the making of fish nets, coastal careers, the work of the Barbados Fire Service and live demonstrations by members of the BCG.