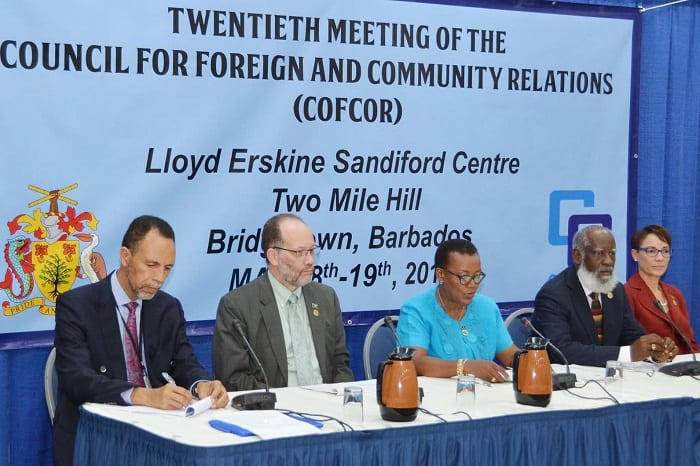 The Twentieth Meeting of the Council for Foreign and Community Relations (COFCOR) concluded today, with what has been described as “enriching” dialogue geared at developing strategies to strengthen the Caribbean Community (CARICOM).

Minister of Foreign Affairs and Foreign Trade, and Chairman of the conference, Senator Maxine McClean, noted that Member States were cognisant of the shifting global political landscape, and “the necessity of adapting the Community’s outreach” to address that change. Her comments came during a press conference at the close of the COFCOR meeting at the Lloyd Erskine Sandiford Centre.

“The major theme of our retreat, Community Engagement for Regional Sustainable Development, enabled us to further explore ideas on that score. We recognised the need for greater interaction among us as a means of significantly enhancing intra-community relations, particularly outside the regularly structured engagements,” she pointed out.

The Foreign minister stressed that CARICOM States were intrinsically aware of the importance of multilateralism to the Community, as well as the need to foster more bilateral relations with a number of countries, including the United States.

Turning attention to designating the Caribbean Sea as a special area, Senator McClean said it was agreed that this matter would be a key agenda item at the upcoming high-level conference on oceans at the United Nations, slated for June.

With regard to the issue of Brexit, the Foreign Minister noted that the conference revealed that it would “present both challenges and opportunities” for the Caribbean. “The COFCOR acknowledges the strong historical ties that exist between the Community and the United Kingdom. They noted that the implications of the UK’s pending exit from the EU, particularly in relation to the Community’s trade and investment relations, and for development assistance, requires further consideration,” she disclosed.

In relation to matters with other nations, Senator McClean, who served as the Chairman for this year’s Council, pointed out that the COFCOR stressed the importance of maintaining and “enhancing the Community’s relations with the African and Pacific regions”.

Similarly, she stated that the Council also recognised the “significant role” of the Cotonou Partnership Agreement, which, she noted, would come to an end in 2020, maintaining that it was an important framework for political dialogue and development cooperation.