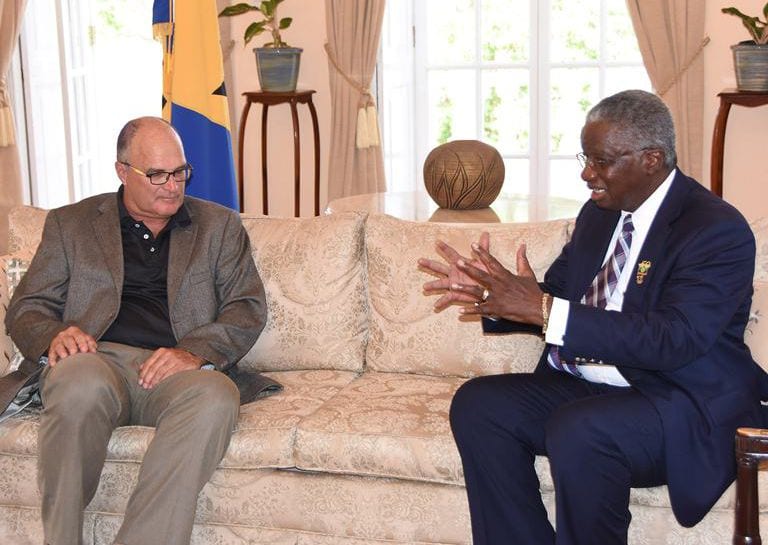 Prime Minister Freundel Stuart sees a “firm, collaborative relationship” as the way forward for Government and the private sector.

He expressed this view recently when the new Chairman of the Barbados Private Sector Association, Charles Herbert, paid him a courtesy call at Ilaro Court. Those present included the Chief Executive Officer of the Association, Anne Reid; and Permanent Secretary in the Prime Minister’s Officer, Sonja Welch.

Mr. Stuart emphasised the importance of the private sector, saying that companies create jobs and contribute to the stability of the country. “While we have different roles to perform, there must be a symbiotic relationship because we really need each other and we have to work together,” he stated.

The Prime Minister pointed out that the Social Partnership had provided the forum for Government and private sector to work together. “The Social Partnership is not an embalmed institution that cannot change its focus or character. In the same way Government has a vision for the society, I think the private sector has a vision for the country, and we have to look to see how we can move forward together,” he stressed.

He noted that the last eight years had been challenging and countries all over the world had to try to find relevant solutions. “There are difficult decisions to be made, high mountains to climb, and we have to make those decisions and climb those mountains. We have to mobilise our creative, innovative capacity to find solutions that do not compromise the quality of life or standard of living of the country,” he said.

Prime Minister Stuart congratulated Mr. Herbert on his new designation and said that his position was a strategically important one which provided an opening for smooth interchange between the public and private sectors. He added that he looked forward to working closely with him to facilitate any challenges on both sides.

Mr. Herbert described his role as a collaborative one, and said it was important for all members of the social partnership to “pull together”. During the wide-ranging discussions, he expressed the view that Barbadians’ appetite for foreign exchange was more than the country could sustain, and suggested that the situation must be dealt with urgently.

He said there were a number of issues that needed to be tackled, and added that the private sector was ready to assist. To this end, he suggested that regular full social partnership meetings were necessary.

Mr. Stuart gave the assurance that he would be willing to meet more often to help to arrest some of the problems.