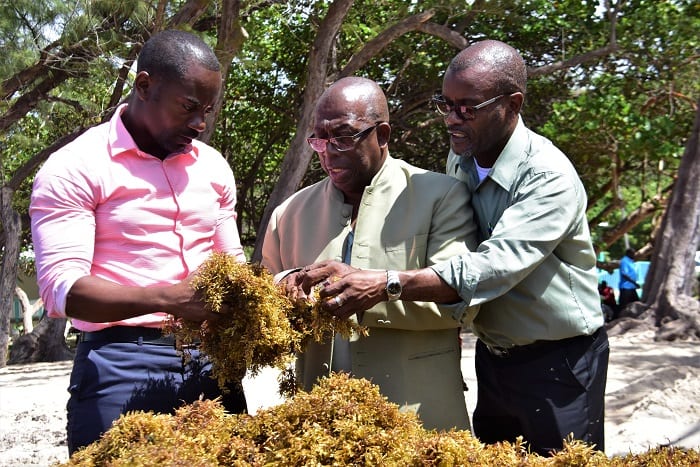 From left to right: Minister of Maritime Affairs and the Blue Economy, Kirk Humphrey; Minister of Environment and National Beautification, Trevor Prescod and Minister in the Ministry of Transport, Works and Maintenance, Peter Phillips, examining the mounds of seaweed during a press conference at Bath Beach in St. John on Friday. (C.Pitt/BGIS)

Government has adopted a “holistic approach”, inclusive of the private sector, to deal with the influx of sargassum seaweed affecting coastal areas.

This was revealed last Friday by Minister of Environment and National Beautification, Trevor Prescod, as he expressed concern about the impact of the seaweed on the shoreline and marine life, during a press conference at Bath Beach, St. John.

Emphasising that the issue was being treated as matter of urgency, Mr. Prescod said “all of the [relevant] agencies were brought in; all the technology that is relevant we discussed that but we started with that we have.”

The Minister further disclosed that authorities were considering sourcing modern equipment to aid in ongoing efforts.

Mr. Prescod added that members of the Barbados Defence Force (BDF) have been deployed at “strategic points” across the island to remove as much as seaweed as possible.

Equipment from the Ministry of Transport, Works and Maintenance was also being used, a move Minister, Dr. William Duguid said was reflective of Government’s commitment to addressing critical matters through collaboration.