On the morning of August 27, 2016, Lyndon Callender was awakened just before 5 o’clock by a sharp, stabbing pain in his chest. He was sweating profusely and experiencing shortness of breath.

The 51-year-old employee of the Grantley Adams International Airport was suffering a massive heart attack or a myocardial infarction (MI), a term with which he later became familiar in hospital.

Barbados records, on average, at least one heart attack per day and three strokes every two days. According to Chief Medical Officer, Dr. Joy St. John, half of those who suffer heart attacks die within two weeks and one-third of stroke victims die within four weeks.

Dr. Kenneth George, Senior Medical Officer with responsibility for Non –Communicable Diseases (NCDs), reports that NCDs are the leading cause of ill-health and death in Barbados’ adult population, and that cardiovascular disease (heart attacks and stroke) heads the list. The Pan American Health Organization (PAHO) also cites NCDs as the primary cause of premature death in adults, aged 30 to 69, in Barbados.

Lyndon was one of the lucky ones. He believes that the quick response of his wife, who fed him aspirin and cayenne pepper water, stabilised him somewhat until the ambulance arrived. He spent 15 days in the Queen Elizabeth Hospital and on his release was referred to the Heart and Stroke Foundation.

Lyndon credits the Foundation’s “excellent programme” with helping him to dramatically change his lifestyle. “I’m here three times a week doing cardio and weight training. I’ve also changed my diet – eating more fruit and vegetables, cutting out grease and, as much as possible, sugar. I drink lots of water and am trying to eliminate stress. 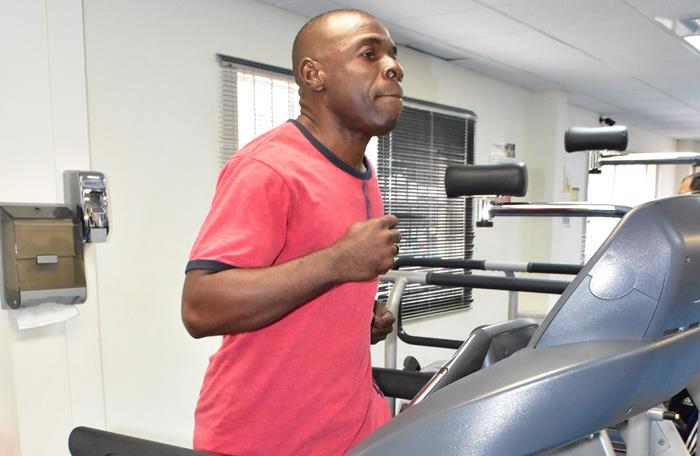 Lyndon Callender exercising at the Heart and Stroke Foundation. (A.Miller/BGIS)

“As a result, I feel much better. I’m much lighter than I was before. There have been no more symptoms of chest pain or fatigue and I now take my health far more seriously. Now I’m back at work, I’m working with a renewed sense of purpose, and also I am able to function much more effectively within my family.”

Fiona Anthony, Chief Executive Officer of the Heart and Stroke Foundation, notes: “A healthy lifestyle is key to reducing cardiovascular disease. There are certain elements that lead you to be at risk that you cannot change such as family history, age or gender. But there are other risk factors that people can change. We can significantly reduce our risk by eating healthy, exercising regularly, and getting regular medical check-ups so that you know your blood pressure, cholesterol and glucose numbers.”

She also emphasised the importance of recognising the signs of heart attack and stroke, and acting quickly. For a heart attack, it is most often a crushing central chest pain which may be accompanied by sweating, dizziness and nausea; and for stroke, the acronym FAST is used as an educational tool – facial drooping, arm weakness, slurred speech and time to call an ambulance.

[x_pullquote cite=”Senior Medical Officer, Dr. Kenneth George” type=”left”]About 80 per cent of persons who have a stroke or heart attack in Barbados have hypertension, and another six out of 10 have diabetes. Another four or five out of 10 are overweight or obese.[/x_pullquote]

Dr. George stressed the importance of a healthy lifestyle, highlighting the relationship between chronic illnesses such as hypertension and diabetes, and cardiovascular disease.

“About 80 per cent of persons who have a stroke or heart attack in Barbados have hypertension, and another six out of 10 have diabetes. Another four or five out of 10 are overweight or obese. So the challenge moving forward is to control your weight, make sure your hypertension is controlled and make sure that your blood sugars remain normal.”

How do you do this? One way is to pay closer attention to what you eat.  Dr. St. John told a recent consultation, hosted by the National NCD Commission: “79 per cent of women and 89 per cent of men consume more than the recommended 1.5g of sodium per day.”

She listed the top five individual food items contributing to sodium intake in the population as rice and peas (6%), baked chicken (5.6%), macaroni pie (4.3%) and coconut bread (3.8%)

Dr. St. John highlighted Government initiatives aimed at curbing unhealthy eating practices, as outlined in the National Action Plan for NCDs 2015 – 2019. These include promoting increased fruit and vegetable consumption; lower levels of salt, sugar and fat; improved labelling of products; and restricted marketing of unhealthy foods to children; along with a proposed ban on sugar-sweetened beverages at schools. 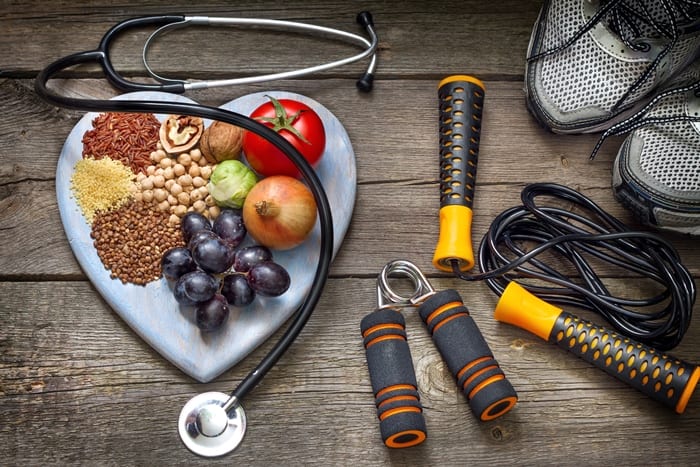 Healthy lifestyle choices such as exercise and cutting down on your salt and sugar intake, can go a long way in combatting cardiovascular disease. (Stock Photo)

The Chief Medical Officer painted a dire picture of the impact of NCDs on Barbados, disclosing that 80 per cent of Barbadians had at least one risk factor and persons with NCDs occupied 60 per cent of the beds at the QEH.

Dr. George maintained: “It is unusual for a person who has a healthy lifestyle, who works out at the gym or who exercises on a daily basis, and who doesn’t drink alcohol or smoke to have a heart attack. It can occur, but the majority of persons will fall into the category where they don’t do any form of physical activity, and if I were to tell Barbadians what are the issues surrounding stroke and heart attack, I will let you know that you need to have a daily routine for exercise, eat healthy foods, no tobacco and limit your alcohol intake.”

Dr. George stressed the importance of being proactive once symptoms occur. “Make sure you get moving in an ambulance as soon as possible. The reason why I am stating this is that the figures for Barbados are showing that our death rates, pre-hospital and post-hospital, both for stroke and heart attack, are not good and we need to be doing better. There is a small window of opportunity for us to be able to do good medical interventions once you are treated quickly.”