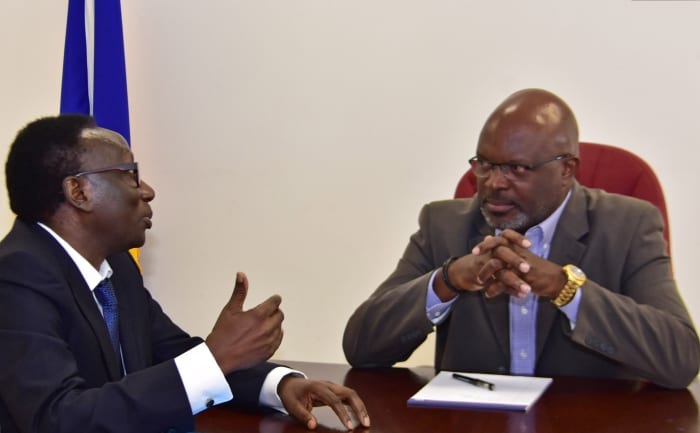 Barbados remains committed to eliminating corporal punishment in keeping with its agreement to protect the Rights of the Child.

And, while Attorney General Adriel Brathwaite believes the time has come to eliminate corporal punishment, he admits that greater discussion and dialogue are needed on the issue before it is accepted by society.

He made these comments this morning during a courtesy call from the new United Nations Children’s Fund (UNICEF) Representative to Barbados and the Eastern Caribbean, Dr. Aloys Kamuragiye, at his Wildey, St. Michael office.

“We need to go to the churches and society and show them the alternatives… We need to resocialise our people,” Mr. Brathwaite said, noting that teachers were already stating that children today were more difficult than those before.

And, while acknowledging that it would not be an easy matter to deal with,   Mr. Brathwaite re-emphasised that he believed in doing what he could to ensure that young people had a second chance. “One error should not define a child’s life,” he maintained.

Meanwhile, Dr. Kamuragiye challenged communication specialists to assist in bringing about the necessary change. “It takes people with passion who are committed. Where change happens it takes commitment,” he stated.

The UNICEF Representative also urged communication specialists to monitor the impact of the efforts over time so that an account could be given of the change being produced in communities.

Meanwhile, he commended Barbados’ efforts thus far in a number of areas, including the draft Juvenile Justice Bill, which also contains proposals to raise the age of criminal responsibility for children from 11 to 12.

But, at the same time, Dr. Kamuragiye lamented what he described as the high prevalence of violence against children throughout the region, particularly in the areas of sexual abuse and neglect. “We have to do something against the widespread violence against our children,” he urged.