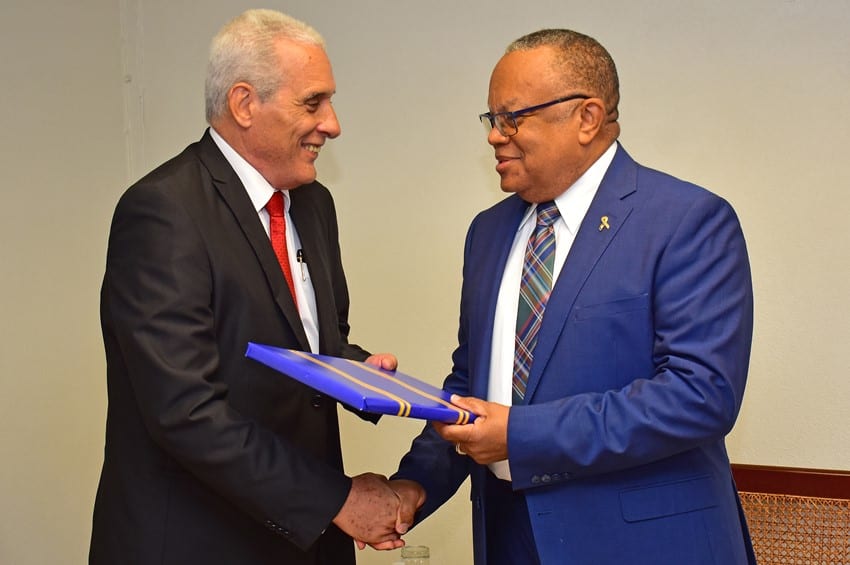 Minister of Foreign Affairs and Foreign Trade, Senator Dr. Jerome Walcott, said the relationship between Barbados and Cuba was based on solidarity, mutual support and technical cooperation. (C. Pitt/BGIS)

Cuba and Barbados intend to strengthen the relations they have maintained since 1972.

Minister Walcott, in acknowledging Cuba’s involvement in various projects on the island, said the relationship was based on solidarity, mutual support and technical cooperation, and added: “We look forward to working with you; our two countries have always worked collaboratively over the years.”

Assuring the Minister that Cuba hoped to continue on the path it has with Barbados and other small island states, Mr. Pastrana said: “Our mandate here is to strengthen our relations to make it even more fruitful in areas Barbados and Cuba have traditionally worked on.  We have had the experience in tourism and we have to work hard to strengthen our transportation links.”

He also stressed Cuba’s interest in strengthening activities within the ACS in areas of sports, culture and technical cooperation regarding these islands’ coral reef.

The two officials also spoke about the double taxation agreement, already in place with Cuba, and assured each other that requisite resources would be put in place to support Barbadian goods in Cuba.

Condolences were also extended to the Government and people of Cuba on the devastation caused by the tornado which occurred in Havana on January 27, and while the two alluded to the situation in Venezuela, Minister Walcott reiterated that Barbados’ position was one of non-interference/non-intervention.