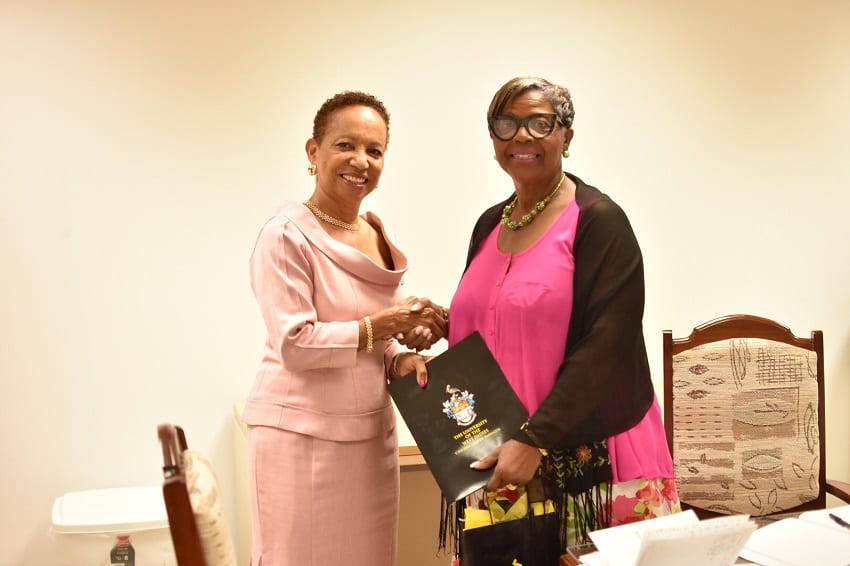 Minister of People Empowerment and Elder Affairs, Cynthia Forde, has stressed the importance of community outreach, as her Ministry seeks to tackle issues such as domestic violence, poverty alleviation and elder abuse.

Speaking during a courtesy call by Principal and Pro Vice Chancellor of the Cave Hill Campus, University of the West Indies, Professor Eudine Barriteau, on Wednesday, Minister Forde said that it was time for these important conversations to be taken out of the conference rooms and into the places where the people were. She suggested the need for more community meetings in school halls, resource centres and churches.

Ms. Forde told Professor Barriteau that she looked forward to working with the university in the many areas where their interests converged, and where best practices could be shared.

Professor Barriteau said she welcomed the collaboration, noting that issues related to people empowerment, the elderly and gender affairs were critical areas to which the Cave Hill Campus was very willing to lend its expertise.

She also hoped to work closely with the Bureau of Gender Affairs and the Ministry as a whole to secure internships for university students, particularly from the Institute of Gender and Development Studies, so that they could gain a broader understanding of the issues which affect people’s lives.

Professor Barriteau also raised the possibility of university students who are now required to complete community service being given the opportunity to volunteer within the public service to help them understand how government works, as well as to develop  a greater sense of civic engagement.

In addition, the Principal outlined the Campus’ Triple A Plan.  It is Access, which promotes expanded access to university education; Alignment, which focuses on greater collaboration between the university and its various publics; and Agility, which underscores the university’s commitment to be more agile and responsive to the needs of the society.