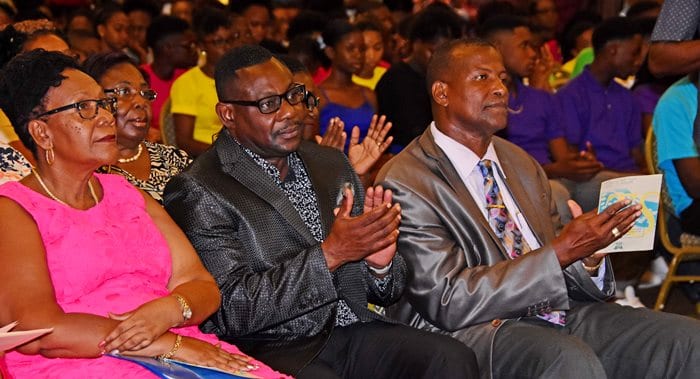 From left to right: Chief Community Development Officer, Patricia Hackett-Codrington; Minister of Social Care, Steve Blackett and Chairman of the National Assistance Board, Senator Rev. David Durant, applaud the participants of the ITs for Teens Summer Program. The closing exercises were held last Friday at the Hilton Barbados Resort, (C.Pitt/BGIS)

With the recent surge of violence particularly among young males, more work must be done to refocus young men and keep them occupied in the community.

This is according to Minister of Social Care and Constituency Empowerment, Steven Blackett, who was addressing the closing exercises for the ITs for Teens summer programme, last Friday at the Hilton Barbados Resort.

“I believe that we need to continue to strengthen our work in refocusing our young men through the provision of positive role models and innovative opportunities like these offered in the Community Technology Programme and Dance Fest – as to improve their way of life and replace the hype they obtain from the current negative activities,” Mr. Blackett maintained.

He added that youth was “a time of a significant amount of unspent energy”, and if young people attained negative power it could have serious consequences.

Commenting on the success of the ITs programme, the Minister reported that this year was another record breaker, as a significant number of males had participated in the programme and this was a “positive sign”. The programme, which was offered at 13 resource centres across Barbados catered to more than 200 students.

Mr. Blackett explained that each year the teenagers were challenged to create a project, be it an internet business, advertising campaign or other viable activity requiring the use of the computer. 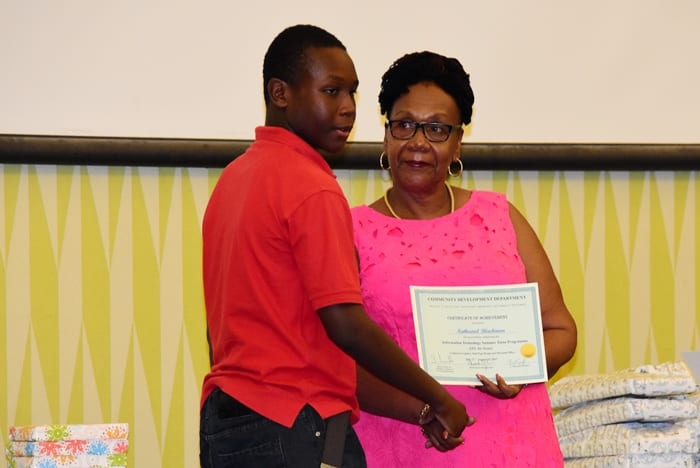 Nathaniel Blackman receives his Certificate of Achievement for the ITs For Teens Summer Programme from Chief Community Development Officer, Patricia Hackett-Codrington. (C.Pitt/BGIS)

This year’s project focus was on ‘Community Tourism’, and created an opportunity for the students to do some research in order to produce their offerings around tourism, for judging at the end of the programme.

“The more outstanding projects which have been developed as a result of this process will be viewed this evening and will be testament of the hard work the children put in.  These projects will also show the guidance and dedication of the tutors and the staff at the resource centres,” he stated.

He applauded the graduates for their hard work and dedication and urged them to improve on the skills that they had learnt over the six-week period.

Minister Blackett also expressed appreciation to the various partners who assisted with the staging of the ITs for Teens programme, while thanking parents and guardians for enrolling their charges.

He also thanked the tutors and centre officers for their invaluable input and for making this year’s hosting a success.