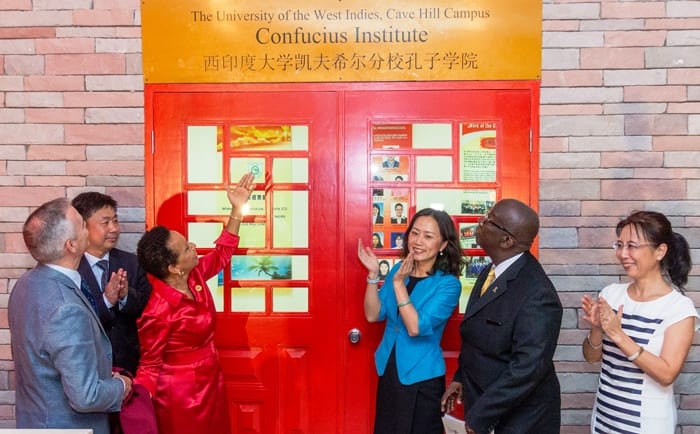 Principal and Pro-Vice Chancellor of the University of the West Indies, Cave Hill Campus, Professor Eudene Barriteau, has welcomed the Confucius Institute to its official home at Cave Hill.

Pointing out that the institute was designed and built to the best of Caribbean construction to reflect the beautiful architectural heritage of China, she remarked: “The Campus is pleased it was able to deliver this iconic Chinese building. The week of activities and this building bear witness to our commitment to our Chinese partners and to internationalising the vision and work of the UWI Cave Hill Campus.”

Professor Barriteau stated that the campus was not only “extremely satisfied” due to the dynamic work which the Confucius Institute has been delivering since its establishment on this campus, but also because it offered intercultural communication and built closer cultural ties between Beijing, Barbados and the rest of the Caribbean.

The Pro-Vice Chancellor noted that long-term pilot projects in the teaching of the Chinese language at two nearby schools were reaping remarkable success, helping young citizens to understand Chinese language and culture from an early age.  She said at Ellerslie Secondary School, the Institute had been teaching three groups of 12 to

She said at Ellerslie Secondary School, the Institute had been teaching three groups of 12 to 14-year-olds for a total of two hours per week, and at St Stephen’s Primary School, four classes, totalling 120 students, had received introductory Chinese language and culture classes.

She also shared that the teaching of Chinese language and culture as part of the BSc in Software Engineering would start in September of this year and a revolutionary agri-business project on 28 acres of land at Dukes, St. Thomas, would soon be embarked on.

Of the latter, she said: “By way of its scale and scope of activities, this UWI-China initiative will be the single most important thrust in agribusiness development and related entrepreneurship in Barbados and the Eastern Caribbean.”