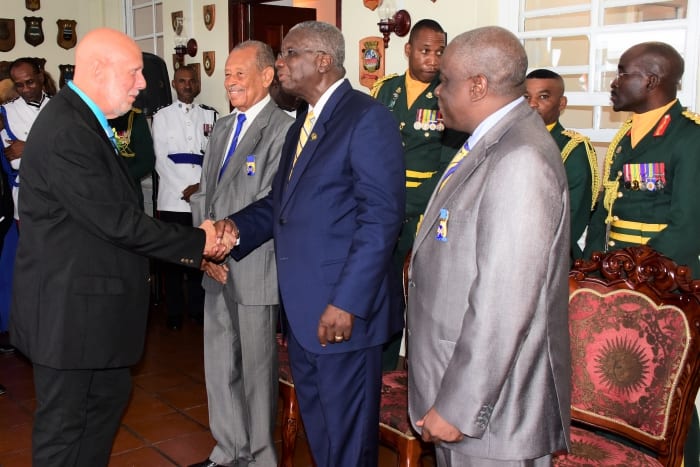 Musician John Roett, the recipient of a Silver Crown of Merit in this year’s National Independence Honours, is greeted by Prime Minister Freundel Stuart at the Toast to the Nation. Looking on are Acting Governor General, Sir Philip Greaves (left), and Chief Justice Sir Marston Gibson (right). (C. Pitt/BGIS)

Prime Minister Freundel Stuart is confident that Barbados will have a successful future, but only if its citizens recognise the need to practise “good and constructive citizenship”.

Mr. Stuart expressed this view today as he addressed scores of distinguished guests, including Acting Governor General, Sir Philip Greaves; Chief Justice, Sir Marston Gibson; this year’s Independence Honourees, Members of Cabinet, Members of Parliament, the Judiciary and members of the Diplomatic Corps, at the Toast to the Nation. The event was held at St. Ann’s Fort, The Garrison, following the annual ceremonial parade to mark Barbados’ 51st Anniversary of Independence.

The Prime Minister stated that the first half-century of this country’s Independence could be described as “50 years of entitlement”, because Barbados had to play catch up after attaining Independence in 1966 in areas such as housing, infrastructure and health care.

He continued: “Because we had to play catch up, the State had to play a particular role in facilitating the development of our people. However, the world in which Barbados became Independent in 1966 has changed very dramatically, and we live in a fundamentally different world governed by fundamentally different rules … and that is going to require some changes from us as citizens of Barbados.”

Stating that the rule of the next 50 years would have to be “ask not what Barbados can do for us, but what we can do for Barbados”, Mr. Stuart maintained that there were many more citizens today capable of giving back to Barbados than was the case in 1966.

“Therefore, those people have to be mobilised, sensitised and their consciences awakened to an understanding that this is their country, and that extracting as much as possible from it and seeing how little you can give back cannot be the order of business in Barbados 2017 and beyond,” he emphasised.

The Prime Minister said he hoped that over the next 50 years, Barbados would continue to place people at the centre of its development, and added that he envisioned that the country would continue in its efforts to “include all, engage all and benefit all of its citizens”.