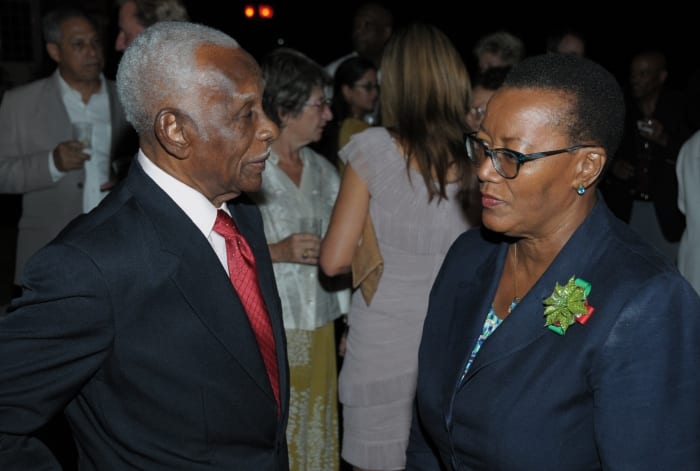 Dean of the Consular Corps, Selwyn Smith, believes that honorary consuls work assiduously to strengthen relations with the Ministry of Foreign Affairs and government.

He made the comment while praising the Corps for its work, during a reception at Southern Palms Hotel, St. Lawrence Gap, Christ Church, last night.

Mr. Smith noted that the Consular Corps had also sought to strengthen relations with the diplomatic corps and the nation as a whole.

“Our networking sessions every last Wednesday of the month have made a quite difference.  These sessions have allowed us to meet formally, share information and get to know each other better,” he said.

He thanked Minister of Foreign Affairs, Senator Maxine McClean, for her support and others who have helped in the functioning of the Corps.

Mr. Smith said he hopes that there would be a closer working relationship with the Ministry and the Diplomatic Corps in achieving goals set.

Meanwhile, Dean of the Diplomatic Corps and Ambassador to New Zealand, Jan Henderson, said she was “incredibly impressed” with the work of the Corps of Barbados.  Ambassador Henderson also praised the Corps for signing a charter last year which sets out their functions.

“That charter sets out your vision and commitment as members of the Consular Corps.  I think it is a shining example of how these groups can work and I am very keen to talk to my colleagues in the Diplomatic Corps to see if they can forge greater and closer links between the Corps,” she stated.

Ambassador Henderson continued: “Collectively, we can continue to be an active supporter and dynamic part of the diplomatic landscape in Barbados, and continue the wonderful cooperation we have with the Government of Barbados and the Ministry of Foreign Affairs.”

Acknowledging the contribution of the Consular Corps in fostering good relations with other countries, Senator Maxine McClean said:  “As you continue to work on behalf of your countries here in Barbados, and for those who represent our interests elsewhere, I want to wish you all the best and I look forward to continuing our relationship.  The Ministry of Foreign Affairs and Foreign Trade appreciates what you do with us and for us.”

The Consular Corps was established 23 years ago.  However, the first Honorary Consul, who was appointed 40 years ago, was the late Sir Marcus Jordan, who served as the Honorary Consul to Cyprus.

There are 25 countries that are represented by Honorary Consuls in Barbados.