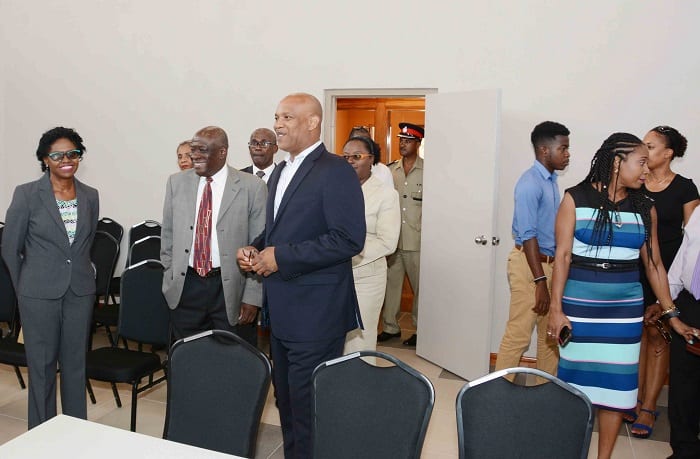 It will cost Government an estimated $2.5 million to execute repairs on the Supreme Court Complex on White Park Road, St. Michael.

And, Attorney General and Minister of Legal Affairs, Dale Marshall, is of the view that after less than 10 years in establishment, there was “no good reason” why the building should be overrun with mould to the extent that it was making employees sick.

Describing the situation as “untenable”, Mr. Marshall explained that the investment made in the facility was vast, but fell prey to the issue of maintenance.

He made these comments following a tour of the Cane Garden, St. Thomas facility, accompanied by Chief Justice, Sir Marston Gibson; Registrar of the Supreme Court, Barbara Cooke-Alleyne; Deputy Director of Public Prosecutions, Anthony Blackman; President of the Bar Association, Liesel Weekes; and other officials.

He pointed out that work was expected to start on the Supreme Court Complex within coming weeks, and noted that “substantial changes” to the roof of the building had to be made in order to improve air quality.

As a result, the Attorney General said, it was being projected that it would take approximately six months, and not the four months originally anticipated, to correct the problems.

Mr. Marshall told reporters that an expensive chiller had to be installed on the roof of the White Park Road, St. Michael complex, which first had to be specially commissioned, manufactured and then shipped to Barbados. In addition, he explained that all the ducting had to be removed, cleaned and replaced.

Meanwhile, the Minister noted that Government would also use this opportunity to construct new court rooms and offices at the White Park Road, St. Michael complex to accommodate the temporary judges who were also expected to come on stream.

“Everything that is to be done on the Supreme Court has been triggered by the negative environmental reports and the reports of the scientists from the University of the West Indies which have said that air quality is poor,” Mr. Marshall said.

He added that a large amount of the money to be would be spent to correct that problem, while other resources would be geared towards proactive measures and the deployment of a building management system.

“That is a computerised system, so that once we spend this $2.5 million in getting the court back into shape, we would not find ourselves back in this position again. A facility that is modern with the kind of technology that we have in it simply cannot be maintained by somebody with a dustpan and a mop. It is not practicable [because] we are dealing with sophisticated air quality systems,” the Minister stated.

However, he gave the assurance that the Cane Garden, St. Thomas facility, originally designed to house the District “D” Police Station, would be maintained as there were a number of elements in the building under warranty.