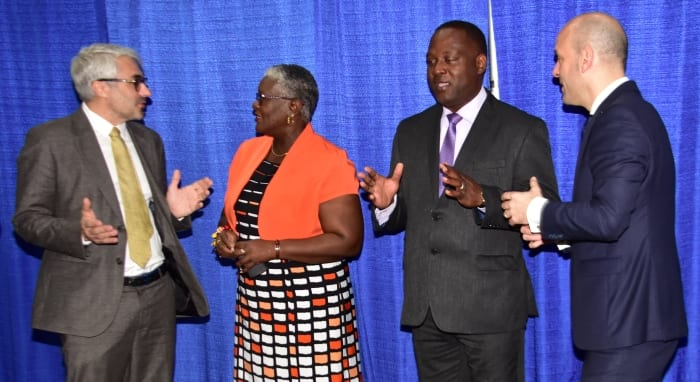 Barbados’ approach to growing and developing its international business sector and financial sector has never been passive.

This was intimated today by Minister of Industry, International Business, Commerce and Small Business Development, Donville Inniss, as he addressed the consultation with the Organisation for Economic Co-operation and Development on Legislative Changes relating to Action 5 and the Forum on Harmful Tax Practices, at the Lloyd Erskine Sandiford Centre.

Noting that the deliberations were meant to be policy creating and technical in nature, Minister Inniss said: “We are seeking from the Ministry’s perspective to create the right kind of policy environment to ensure that this international business and financial services sector grows from strength to strength.”

He told stakeholders in the sector that internationally, the emphasis was on strengthening the international financial architecture. He added that Barbados had for many years been playing a major role in the movements of financing, and in the growth and development of international business around the world.

Stating that it would be foolhardy to believe that Barbados was not constantly under scrutiny, he added: “Our approach as a Government has been ‘get up and get involved in what matters most to this particular sector’. So, gone are the days where we sit in Barbados and complain about what others are imposing upon us.”

While thanking the private and public sector partnership for guidance in this regard, Minister Inniss further explained that this country’s approach had been to get involved in the meetings and organisations, where major decisions are being taken that would impact the sector.

He stressed: “So, a few years ago, we got very much involved in the Global Forum, eventually to the point where Barbados quickly became the vice chair of the steering committee. And, I think through a mechanism like that, the voice of Barbados and by extension, the small open economies in the Caribbean are now being heard. And, we are certainly given an opportunity to help shape the right kinds of policy and programmes to drive the sector forward.” 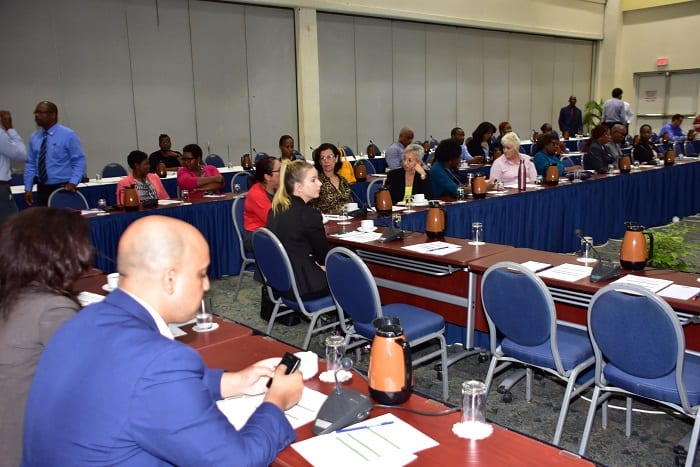 Participants at today’s OECD consultation on Legislative changes relating to Action 5 and the Forum on Harmful Tax Practices at the Lloyd Erskine Sandiford Centre. (C.Pitt/BGIS)

The Minister also noted that the multilateral instrument, which the island signed on to recently, was a step in the right direction because Barbados was now cemented within the global arena, and discussing the kind of architecture that is necessary to grow the international business sector.

He said: “Simply put, developed countries are looking at ways in which they can keep their corporate tax payers or high net worth taxpayers at home. Just as we in Barbados, from the Government perspective, want to get as much money as we can to pay for all the goods and services that our citizens are demanding, so too are France, Australia, Colombia, the UK and the USA. They are all doing the same thing. We may not like how they are doing it, but the principle remains that they have their sovereign right to try and keep as much of their taxpayers’ dollars at home.

“Of course, they are also very mindful that that will perhaps frustrate global trade and business, and therefore we have come to a compromise where we are now seeking to find the right kind of playing field that is as level as possible to ensure that they get their fair share, and we, through the legitimate structures and arrangements we have, are able to have our fair share as well and then all would be happy.”

The consultation targeted over 150 stakeholders licensed to do business with international businesses here on the island. It included organisations such as the Barbados International Business Association and the Institute of Chartered Accounts of Barbados, as well as Ministry personnel and representatives from the Ministry of Foreign Affairs and Foreign Trade.