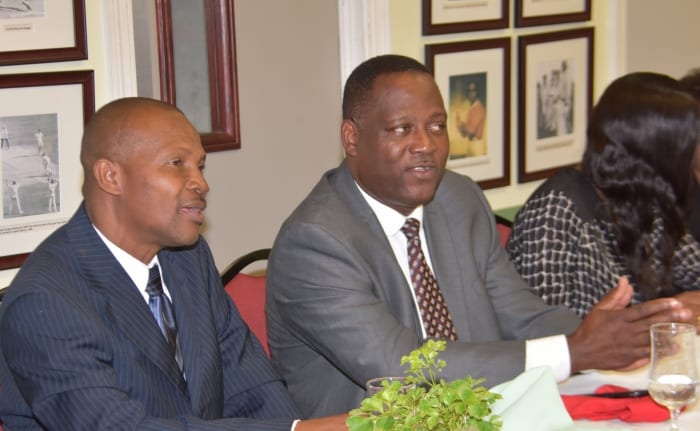 Enterprising business owner Curtis Todd has been lauded for his vision, dedication and sterling leadership that has seen his company, Crumbz Bakery, reap success over its five-year existence.

The praise came recently from Minister of Industry, International Business, Commerce and Small Business Development, Donville Inniss, as he addressed the annual awards ceremony of the company at the 3W’s Oval, University of the West Indies, Cave Hill.

Highlighting the significance of micro, small and medium-sized enterprises to the Barbadian economy, he acknowledged that Crumbz was among those organisations which recognised the importance of employees, and of engaging them in a very constructive way.

He said: “I’ve always been contending that we still have the remnants of that plantocracy mentality flowing within the veins of businesses in Barbados where it is ‘us versus them’, and ‘employer versus employee’. We don’t get that level of engagement where the maid really is cocooned in a corner of keeping the place tidy and doesn’t get the chance to sit with management and vision the company ….

“And, I have recognised over the years that Mr. Todd’s businesses are growing because he is one who believes in employee engagement and that is very important. The ‘us and them’ mentality is really in my mind not suited for contemporary business in Barbados and anywhere in the world.”

Noting that overseas’ companies like Disney and Starbucks had grown in many ways as a result of listening to the needs of customers, the Minister maintained that it was imperative that small and medium-sized enterprises engage both staff and customers.

Urging individuals not to merely spend time complaining about the economic situation, Mr. Inniss stressed that the biggest challenge Barbados faced lay within “the ability of our people to think and act outside the box”.

Elaborating further, he said: “While others spend a lot of time complaining and condemning, I think we must celebrate with those who have the ability or intestinal fortitude not to complain, not to quarrel, but to look for opportunities.

“And, I am recognising more and more that whilst so many out there are complaining about the state of affairs in Barbados, there are some who are quietly and steadfastly [like Mr. Todd] getting on with the business of creating jobs, saving foreign exchange, earning foreign exchange and fundamentally growing business.”

Pointing out that a lot of that transformation was occurring in small businesses here, he said the reality of it was that the bedrock of the Barbadian economy has been and would continue, for the foreseeable future, to reside within the micro and small enterprise sector.

The occasion also saw Mr. Todd presenting awards to staff and commending friends, well-wishers and other organisations for their assistance over the years.  Among those receiving plaudits was the Barbados Investment and Development Corporation (BIDC), which Mr. Todd stressed allowed his company to grow significantly because of their involvement and support.

“They have been there for us from the beginning.  When we first started, we were very small, just about five persons in terms of employment; now we have a cadre of just about 40 or more persons and the BIDC was there to ensure that the developmental help that we needed was there. They were there to support us with the technical aspect of our business and I must say I am very grateful,” the Managing Director stated.

A number of other organisations were also recognised, including Scotia Bank, which he noted “had always been there for Crumbz in critical times”, and the Full Gospel Businessmen Fellowship Association, for allowing him to share testimonies on challenges encountered with growing the business.