CSME Meeting To Address A Range Of Issues 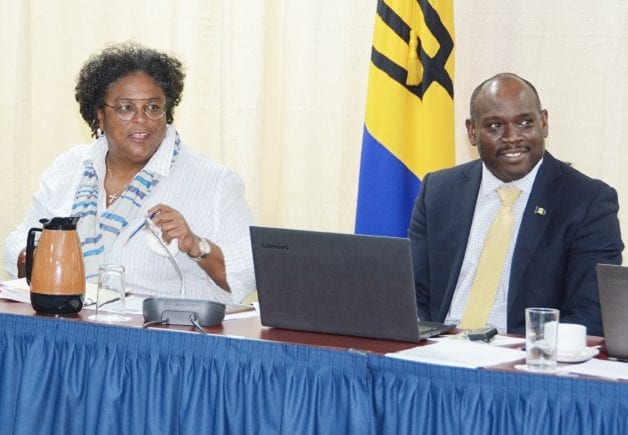 Prime Minister Mia Amor Mottley and Minister in the Ministry of Finance, Ryan Straughn, at the national preparatory meeting for the 9th Meeting of the Prime Ministerial Sub-Committee on the CARICOM Single Market and the Economy. (B. Hinds/BGIS)

A number of issues will be on the agenda next week when CARICOM heads meet in Barbados for the Ninth Meeting of the Prime Ministerial Sub-Committee on the CARICOM Single Market and the Economy (CSME) on Wednesday, September 5.

These were discussed during a national preparatory meeting with high-level Government officials chaired by Prime Minister Mia Amor Mottley at the Lloyd Erskine Sandiford Centre (LESC) on Monday.

Issues relating to the contingent rights of citizens, such as health care, education, the single registration of international businesses, and the approval of automatic six-month stays to CARICOM nationals, were among the areas discussed.

The Prime Minister indicated that there were a number of issues that required follow-up action which could not be treated in a vacuum. “The global market has to be our market,” she stressed.

She called on those present to identify policy issues within their areas and come up with suggestions for how they could be addressed. “I need for each of you to tell me what it will take to transform each Ministry you have so that we can turn things around,” Ms. Mottley stated.

Prior to next week’s CSME meeting, Prime Minister Mottley will join Ministers of Finance from around the region for the Sixth Special Meeting of the Council for Finance and Planning (COFAP) on Tuesday, September 4. Both meetings will be held at the LESC.

The COFAP is responsible for economic policy coordination, financial and monetary integration of Member States. That meeting will be chaired by Prime Minister of Antigua and Barbuda, Gaston Browne.