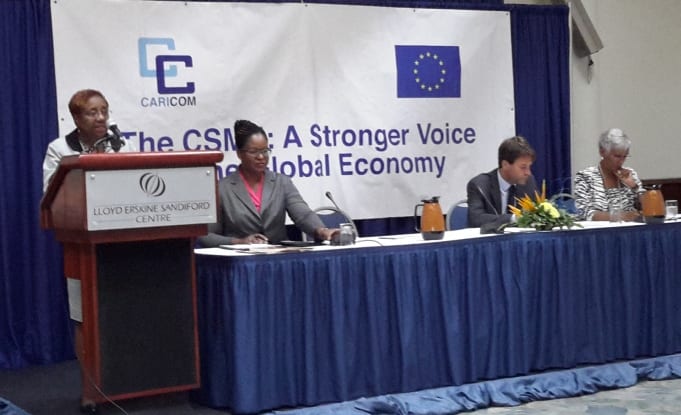 Several representatives from private and rural organisations now have a better understanding of how to make the most of the mechanisms under the CARICOM Single Market and Economy (CSME).

This is thanks to the staging of a one-day workshop on Wednesday by the CARICOM Secretariat and the European Union for Private Sector and Rural Communities on the CSME at the Lloyd Erskine Sandiford Centre.

Delivering the keynote address, Permanent Secretary in the Prime Minister’s Office, Sonja Welch, advised participants to take advantage of the opportunities afforded under the CSME, since it “reinforces and creates opportunities for new and exciting linkages”, especially in the tourism sector.

She continued: “Unfortunately, many equate the success of the CSME simply with the movement of visitors throughout the region. While tourism and hospitality to all is our mission as a premier tourist destination for a country like Barbados, the CSME is much more than the automatic entry into a Member State. So for example, access to the marketplaces of the region for legitimate economic activity through the Treaty of Chaguaramas should be as highly prized as free movement, but that involves the economic prosperity of the region.”

She reminded persons that the rights of a CARICOM national can be exercised in any location within the Single Market, and said that those rights extended to the Caribbean Court of Justice under “certain circumstances”.

The workshop was organised by the CARICOM Secretariat, the Prime Minister’s Office and the CSME Unit, with assistance from the European Union under the 10th European Development Fund CSME and Economic Integration Programme.