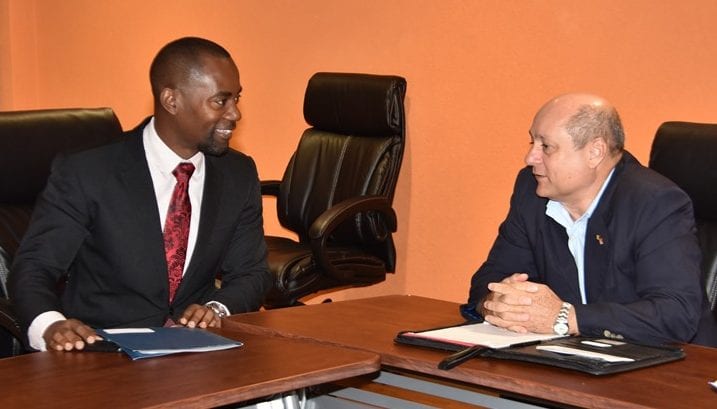 Opportunities for deepening relations between Barbados and Cuba will be explored, as Government seeks to make inroads in a number of areas related to its marine environment.

Minister of Maritime Affairs and the Blue Economy, Kirk Humphrey, made this clear, following a recent courtesy call with Cuban Ambassador, Francisco Fenandez-Peña.  Permanent Secretary in the Ministry, Esworth Reid, was also present for the visit.

During the wide ranging talks, Mr. Humphrey identified a number of areas which were of concern to Government, and for which assistance was required.  Those areas include the influx of the Sargassum seaweed, the boat building capacity of those in the fishing industry, communication equipment for fishermen, the island’s coral reefs and building of additional marinas.

“There are many areas of possible collaboration,” the Minister pointed out.

Minister Humphrey said he would follow up the visit with formal correspondence, as requested by the Ambassador, to chart the way forward.

Mr. Reid also supported the view that Cuba could be instrumental in assisting Barbados in the development of its blue economy, particularly in the area of boat building.

This, he said, was expected to become a source of employment for young people, and a foreign exchange earner.

The Ambassador said although Cuba was not a full member of CARICOM, there were three key areas which they were working on – finance, natural disasters and the arts.

He added that Cuba could assist Barbados in some of the areas outlined, and in identifying the direction it wanted to take in relation to renewable and ocean energy.

“We want to evaluate to share information and cooperation,” the Ambassador stressed.

Other areas discussed included the Sandy Shorelines Project, which is aimed at improving the condition of the coral reefs and beach ecosystems, and Barbados’ position on the Association of Caribbean States, which is aimed at promoting and contributing to the sustainable development of the Caribbean Sea.

Barbados and the Republic of Cuba established diplomatic relations on December 8, 1972.