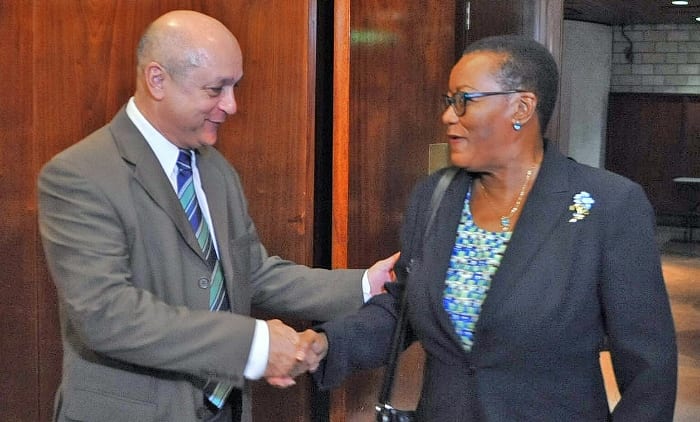 Cuba’s Ambassador to Barbados, Francisco Fernández Peña greets Minister of Foreign Affairs and Foreign Trade, Senator Maxine McClean, on her arrival at the cocktail reception to mark the 58th Anniversary of the Triumph of the Cuban Revolution at the Grand Salle. (A.Miller/BGIS)

The most fitting testament of solidarity between Cuba and the Caribbean would be their active collaboration to strengthen the region’s domestic, regional and global agendas.

Minister of Foreign Affairs and Foreign Trade, Senator Maxine McClean, expressed this view while addressing a cocktail reception on Tuesday at the Grande Salle, to mark the 58th Anniversary of the Triumph of the Cuban Revolution.

Senator McClean explained that while the official date of January 1 had passed, the global impact of the Cuban Revolution and its contribution to modern history for the country of Cuba and the region must be celebrated.

“Today, Cuba stands poised to fully capitalise on its significant advances in healthcare, science and technology; its world-class cultural exponents and resilient people,” she stated.

The Foreign Affairs Minister said that the people of Cuba could proudly celebrate its 58 years of revolution, “confident that the country’s reputation for global leadership and international solidarity will long be remembered and appreciated”.

She added that Barbados joined with Cubans and the rest of the world in mourning the passing, last November 25, of the leader of the Cuban Revolution, Fidel Castro.

“Any commemoration of the 58 years of celebration is also one that recognises the vision, the tenacity and the courage of Fidel Castro. His focus was not only on Cuba, but covered of course the entire developing world,” she remarked.