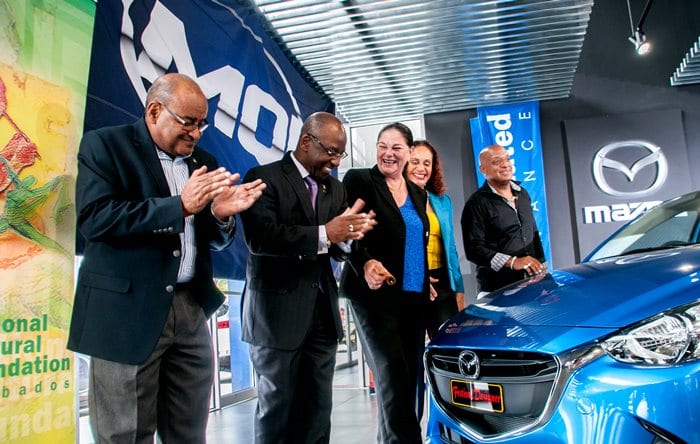 Members of the private sector have come in for high praise from Minister of Culture, Stephen Lashley, following the donation of a car for the winner of the Festival Designer of the Year for Crop Over 2017.

Speaking yesterday at the launch of the Soca Royale Competition at McEnearney Quality Inc. (MQI), Mr. Lashley expressed appreciation to Consolidated Finance and MQI for donating a 1600cc Mazda 2, valued at $68,000.

He described the donation, which came on the heels of his Ministry’s pledge to invest more in the prize monies for the various Crop Over competitions, as an indication that both companies continued to “lead by example as good and proud corporate citizens”.

The Minister said that the donation was “good for the festival”, and indicated that the decision to award the top designer such a prize was a move that was long in coming.

“[It is] a signal tribute to the artistry and commitment of our band designers, and I always say that they have consistently over the years continued to bring colour and pomp to our festival, and, like all of our partners, are deserving of accolades and outstanding prizes.

“It is really about the masqueraders; it is about the designers; it is an opportunity to say that ‘your efforts are recognised and we appreciate the long hours that you have been giving in terms of designing the most excellent of costumes’,” the Minister stated.

MQI will also provide two Mazda 3 sedans for the Sweet Soca and Party Monarch winners. The vehicles are both valued at $79,900.