Culture Minister On Board For Skatepark 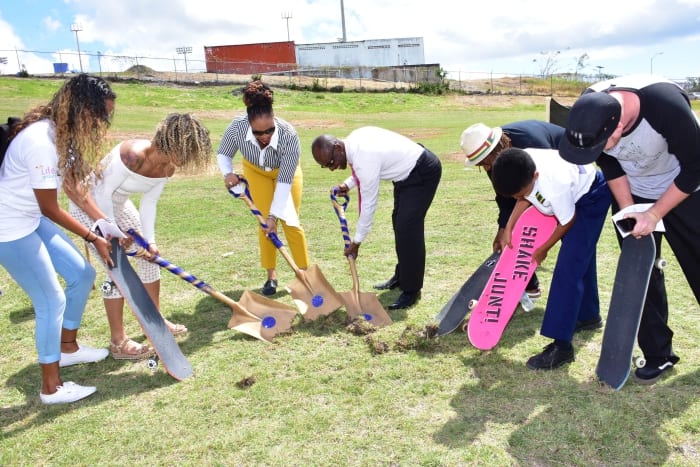 The Minister expressed his gratitude recently during the ground breaking ceremony for the skatepark on its designated site at the Garfield Sobers Sports Complex.

While he thanked the non-profit organisation for funding the entire project to the tune of US$1.4 million, Mr. Lashley explained that there were some challenges when the idea was first conceptualised.

“At the time, the Ministry was in discussions with an overseas company, as we saw the immense potential of having a skatepark in Barbados with respect to the development of our youth. However, that initiative did not come to fruition due to challenges on the part of that entity,” he explained

Following the handover, both the Ministry, who provided the space for the park, as well as the Skateboarding Association of Barbados, will be responsible for ensuring that the facility is properly utilised.

While praising the local Skateboarding Association for hosting an invitational tournament over the past seven years and successfully attracting regional participation, Mr. Lashley expressed the belief that the skatepark could lead to many positive returns for Barbados. Among them, he noted, was the opportunity for the nation’s youth to be exposed to a high level of competition in the sport.

He further stated that the donation of the park was timely, as the International Olympic Committee has supported the inclusion of skateboarding in the Tokyo 2020 Olympic Games.

“The creation of this park can, therefore, enhance the prospects of Barbados being represented in skateboarding at the Tokyo Games, as well as increase our chance of attaining an Olympic medal,” he suggested.

The skatepark, which is the first of its kind in the Caribbean, was designed by Founder and President of Pillar Design Studios L.L.C in the USA, Brad Siedlecki, and Andy Duck of Artisan Skateparks.