CXC Described As A Shining Light 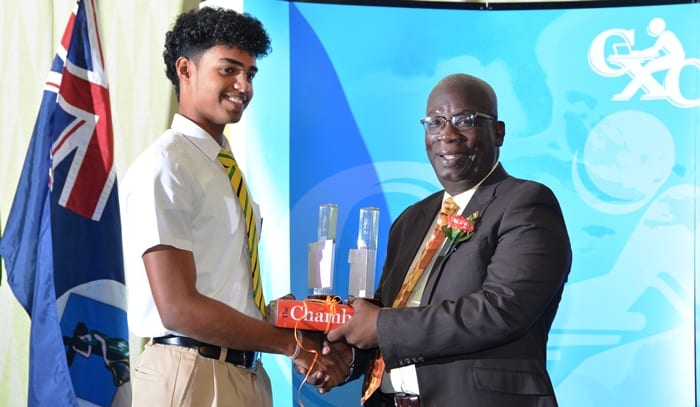 Education Minister, Ronald Jones presenting Kayshav Tewari of Queen’s College, Guyana with his prize for The Most Outstanding Candidate in the May/June CSEC examinations at the opening of the CXC’s Council Meeting and Awards Ceremony at the Hilton Barbados. (B.Hinds/BGIS)

The Caribbean Examinations Council (CXC) is one of those shining lights that we can hold up to the world, says Education Minister, Ronald Jones.

Speaking at the opening of CXC’s Council Meeting and Awards Ceremony at the Hilton Barbados on Thursday, he said: “It [CXC] has grown; it has expanded; it has diversified its offerings to our people; it has had outstanding leadership over time, both at the level of Council and Registrar and those who manage the affairs of that body.”

He lauded CXC for its work with students in the Caribbean saying: “You have to continue investing and reinvesting, to look and look again and to enhance everything that you do because there is a dynamic reality taking place. Young people are learning today with different modalities; the application of different methodologies must be brought to bear on their purpose for learning.”

However, Mr. Jones urged persons in the region to constrain themselves as they looked at the new learning style of students.

He said they should do so because on one hand increased technology was being used as tools of learning, and on the other hand, they had become “tools of destruction”, negatively affecting the mind.

“They corrupt our young people by the very presence of misuse, but yet we cannot step back from them. But what we have to do is to bend them to practical use within our learning environment,” the Minister said, acknowledging that CXC was doing this by introducing digital assessment.

He assured CXC that Barbados saw itself as an integral partner in the digital project and would support it.

Registrar of CXC, Glenroy Cumberbatch, reflecting on the history of CXC and its Council Meetings, said it was first started in Barbados in 1973, with a mandate given by Errol Walton Barrow “to provide an education for Caribbean learners and to ‘Caribbeanise’ the education that was being provided”.

Adding that these were driven by strategies and plans developed by individual countries, he said they also focused on the fact that each learner brought “a whole set of curiosity to the table when he/she comes to school”, and on assessing learning, among other things.

Congratulating the students on their success, Mr. Cumberbatch said: “The content demand is very clear in our syllabuses and the activities used for teaching and for assessments are also very clear….”

He stated too that while some concerns were being expressed about CAPE being recognised internationally, there were no problems encountered when students went overseas. 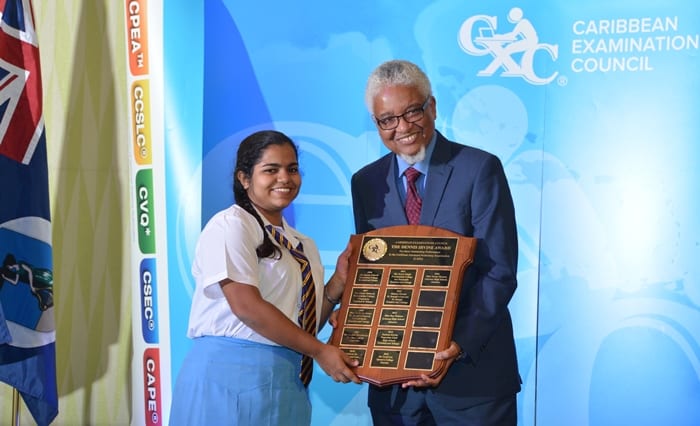 Professor Nigel Harris presenting Varna Thomas of Ardenne High School, Jamaica with the award for the Most Outstanding Candidate in the May/June CAPE examinations. (B.Hinds/BGIS)

The Most Outstanding Candidate in the May/June CAPE examinations was Varna Thomas of Ardenne High School, Jamaica. She achieved Grade I in 12 Units, all with As on the module grades.

For the first time this year, CXC introduced regional awards for outstanding performance in the Caribbean Certificate of Secondary Level Competence (CCSLC). The award for the most outstanding male went to Jason Philip of Presentation Brothers College in Grenada.

The female awardee was Keiana Browne of North East Comprehensive School of Dominica. Both achieved a Master in CCSLC English and Mathematics, along with Grade 1s in CSEC subjects.