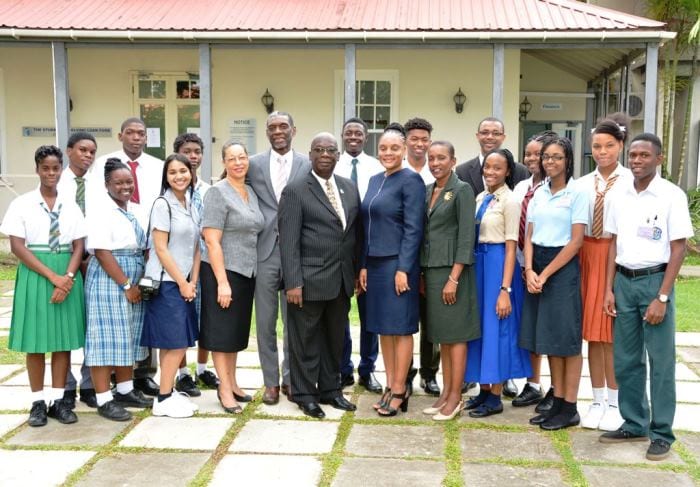 Education Minister, Ronald Jones (centre) and education officials pose with the top CXC students in the region at the Ministry today. (B.Hinds/BGIS)

Minister Jones, who met with those students, Barbadian students and education and CXC officials, said it was good when young people in the region tried to reach the best that they could reach.

Noting there were other important aspects of life, he remarked: “We talk about the holistic development of the Caribbean citizen and you young people are part of that citizenry and therefore the hopes that we have… we are going to rely on generations who have come after us to keep that momentum.

Acknowledging that a lot of good work was done in the past and continues today, he said the future would be a reflection of the good work which the students were doing through CXC, and of where they would be able to take the region.

“This is just but a small journey. There is so much more for all of you to do in your studies…. Don’t rest on your laurels,” Mr. Jones said.

Registrar of CXC, Glenroy Cumberbatch, who previously worked at the Ministry of Education, expressed pleasure that Barbados had accepted the invitation to host the CXC Governance/Council Meeting from December 1 to 2.

Reflecting that it was last held in Barbados in 2008, he said: “We are happy that it is on this occasion when Barbados is celebrating its 50th anniversary, and also the more recent news where Barbados is now number nine in the world public school system.”

Mr. Cumberbatch explained that every year the top awardees were brought to a particular point where the Council Meeting was kept and said it was part of CXC’s integration effort to bring people together.

He said it also allowed students to interact with officials, such as the Governor General, Prime Minister, Minister of Education and Leader of the Opposition.

The 17 students will be recognised for their outstanding performances at the Opening and Awards Ceremony on Thursday, December 1, at the Hilton Barbados Resort, Needham’s Point, St. Michael.  Minister Jones will deliver the feature address at 7:00 p.m.

For outstanding achievement in the Caribbean Secondary Examination Certificate, two males from Guyana; one female each from Grenada and Trinidad & Tobago; two females from Jamaica; and one male each from Jamaica and Belize will receive the 2016 Regional Awards.

The 2016 Regional Awards for outstanding achievement in the Caribbean Certificate of Secondary Competence will be presented to one male from Grenada and one female from Dominica.