With crime in Barbados becoming more organised and with greater threats to cybersecurity, efforts are under way to establish a National Cybersecurity Strategy to provide the island with “a robust cyber defence”.

This was disclosed by Attorney General, Adriel Brathwaite, as he delivered remarks during the first annual conference of the Department of Public Prosecutions under the theme: Strengthening our Capacity to Combat Cybercrimes and Other Organised Crimes, at the Accra Beach Hotel and Spa today.

The new framework, the Minister said, would include a revision and revamping of legislation to provide the required security.

It would involve work on the Computer Misuse Act, the Electronics Transactions Act, the Telecommunications Act and the Copyright Act.

And, the Attorney General has hinted at the possibility of new legislation being introduced, such as the Interception of Communications [Act], to strengthen efforts being undertaken.

“What we are faced with as a region, and as a country, is real. We have seen more cyber-related attacks on our government infrastructure and our private infrastructure. We must be on the cutting edge in terms of our defence,” he stated, noting that the Telecommunications Unit was presently working to ensure Barbados had a more secure cybersecurity platform. 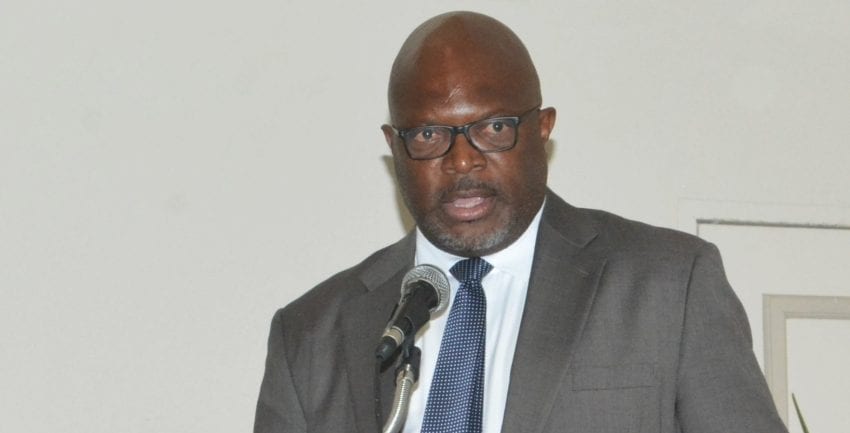 Attorney General, Adriel Brathwaite, speaking at the first annual conference of the Department of Public Prosecutions at the Accra Beach Hotel today. (M.Brathwaite/GP)

Mr. Brathwaite said Barbados also needed to do additional work in the area of transnational organised crime, and gave the commitment that the Civil Asset Forfeiture legislation would be before Parliament by the end of November.

However, he stressed that there was a need for greater cooperation among stakeholders, a deficiency which is already being addressed.

“My call is for greater cooperation for us here in Barbados and across the region. None of us can do it alone. The threats that we are faced with in terms of cybersecurity and transnational organised crime require a wholistic approach nationally and a regional approach,” he maintained.

Meanwhile, Chief Justice of Barbados, Sir Marston Gibson, noted that crime in Barbados had become organised and today’s criminal now had not just weapons, but also money deposited in the bank.

And, he warned that such criminals would use the computer to their advantage.

“[One] of the ways in which you would prevent cybercrime is by making sure your system is as cyber secure as possible,” he said, warning that security patches for computers should be kept up to date.

Over the next three days of the conference, members of the judiciary will discuss Tackling Serious and Organised Crime in Barbados and the Eastern Caribbean; Facilitating the Presentation of Evidence by Use of Technology in the Courtroom; A Case for Recording Police Interviews to Reduce False Evidence; Introduction to Cybercrime; Special Measures for Giving Evidence by Vulnerable Witnesses; and Internet Investigations.