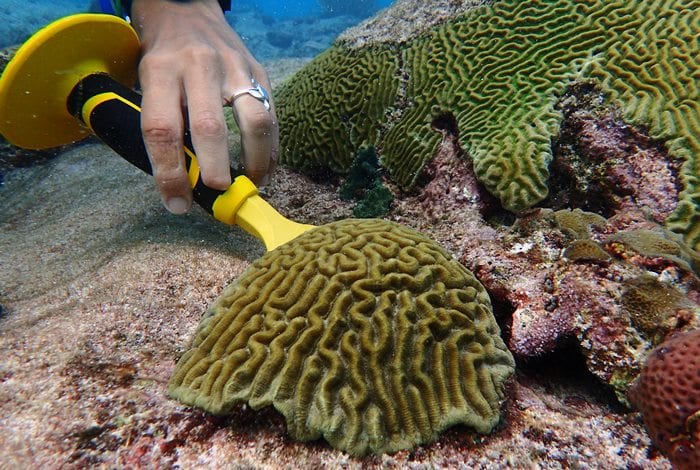 The harvesting of donor coral using a hammer and chisel. (GP)

Barbados’ investment of close to US$1 million to reinvigorate the island’s coral reefs through transplantation is reaping success.

Coastal Information Systems Manager at the Coastal Zone Management Unit (CZMU), Ramon Roach, confirmed that an examination of the coral fragments transplanted under the Ecosystem-Based Adaptation Pilot Project showed that they were “doing okay”.

He explained that the pilot project, which fell under the IDB-funded Coastal Risk Assessment and Management Programme, and was executed by the CZMU, was designed to investigate the potential to “kick-start” the recovery of the island’s coral reefs.

“We did the transplantation exercise at the four sites – Asta, off the site of the former Asta Hotel; on the Rockley breakwater; on the West Coast near Mullins; and at the Drift Wood, just south of Weston, St. James,” he explained.

There were four main species of corals harvested under the project – elkhorn coral, finger coral, mustard hill coral and brain coral – which were taken from Barbados’ west and south coasts.

However, he recalled that the first time corals were harvested from donor sites and taken to the lab at the Bellairs Research Institute of McGill University, they did not survive because they were too stressed by the process. As a result, the protocols for harvesting the coral reefs were revised.

Mr. Roach explained that during harvesting, pieces of coral were removed from the reefs and fragmented into small pieces which were attached to plastic tiles using superglue, and allowed to grow in tanks under controlled conditions. They were then transplanted back into the sea after they got bigger, where they will be closely monitored by the CZMU.

He added that while there was presently an indoor lab to facilitate the growth process, there were plans to establish an outdoor facility to act as an intermediate stage between the laboratory and the marine environment within the next two years. 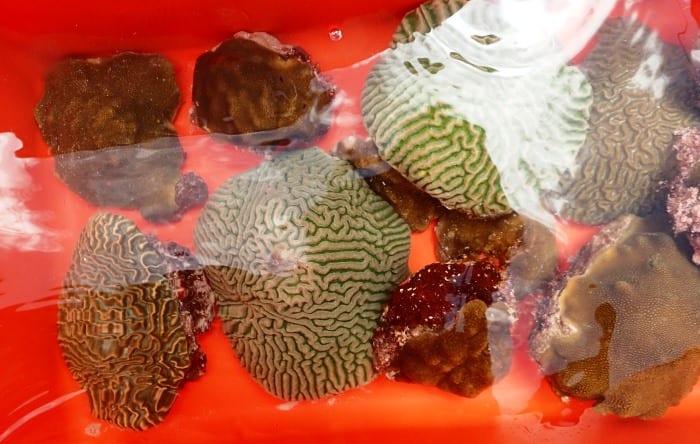 The Coastal Information Systems Manager noted that the successful transplantation of the coral fragments marked the end of the Ecosystem-Based Adaptation Pilot Project, which started in June 2014.

However, he pointed out that the coral nursery, established through the renovation of an existing laboratory at the Bellairs Research Institute, would continue functioning to grow and culture the corals.

Mr. Roach explained this would be done under a separate project being executed by the Bellairs Research Institute, in conjunction with the Multilateral Investment Fund of the IDB, aimed at “kick starting” the non-governmental organisation, dubbed CORALL.

“That is to facilitate the establishment of a public-private partnership for the enhancement of coral reefs around the island,” he said, noting that section of the project would run for two years, after which CORALL was expected to be self-sustaining.

CORALL comprises an Executive Committee, including the President of the Bellairs Research Institute, Dr. Susan Mahon. The NGO also has organisational and individual membership. The CZMU will remain integrated in the process as a member of the steering committee of CORALL.

In addition, the CZMU will be responsible for the processing of permit requests for any future coral collection and transplantation activities under CORALL.