The Environmental Health Department in the Ministry of Health is currently carrying out daily fogging exercises on the south coast as it seeks to control the proliferation of Culex mosquitoes in the area.

Deputy Chief Environmental Health Officer, Ronald Chapman, reported that this was only one of the steps being taken in response to the increase in the mosquito population, which was affecting residents from as far north of the Graeme Hall Swamp as Amity Lodge, and up to St. Lawrence in the south.

The proliferation, he explained, was due to spillage of sewage from the south coast treatment plant into peripheral areas of the swamp.

“One of the characteristics of this mosquito is that it breeds primarily in dirty water. Some sewage spills have crept into the waters of the Graeme Hall Swamp and it is in these peripheral areas that you will see the Culex mosquito now breeding.”

He maintained that there have always been mosquitoes in the swamp. “What we are trying to do is to bring the levels down from the high levels we’re having right now. It isn’t that we’re going to get rid of all the mosquitoes. That is an impossibility with a swamp. There’s no swamp in the world, when you have these temperatures like the ones we have, that you will not get mosquito breeding.” 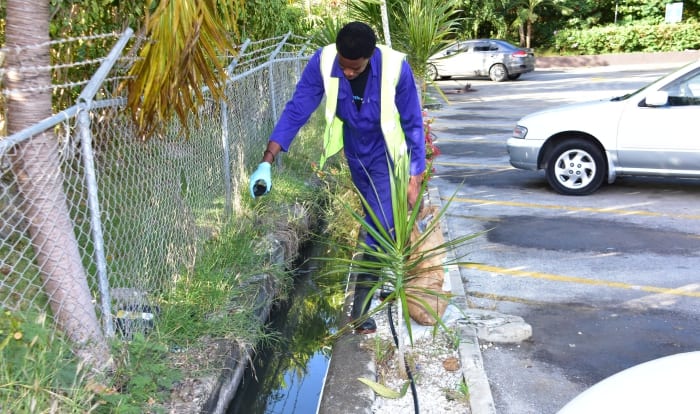 An officer of the Environmental Health Department pouring bait granules for mosquitos into sewage water on the south coast. (C.Pitt/BGIS)

Mr. Chapman noted that unlike the Aedes aegypti mosquito which preferred to breed in clean rain water in small containers, the Culex mosquito tended to breed in large fields of water that were slightly brackish.

While the mosquito was responsible for spreading diseases such as Japanese encephalitis, West Nile virus and elephantiasis, he said, the causative agents for those diseases were not present in Barbados.

“So, in Barbados, the Culex mosquito is more or less a nuisance mosquito. It will bite you but there is no spread of any disease,” he reassured.

The Deputy Chief Environmental Health Officer described the pest as a small, brown mosquito, approximately four millimetres in length, which was a nighttime feeder, biting mostly between 7:30 p.m. and 1:00 a.m., adding: “It has a very pronounced circadian rhythm – it sleeps and awakes with the rising and falling of the sun.”

In response, the daily fogging exercises are being carried out mainly late in the evening because, “the sun is going down and the atmosphere is cooling and this allows the fog to stay at ground level where the mosquitos are flying during that time of the evening”, Mr. Chapman informed.

In addition, the Environmental Health Department has increased the level of surveillance in the area, visiting householders and businesses, as well as keeping watch of activities within the swamp.

The officers are treating the contaminated water daily by putting bait granules, scientifically known as temephos, into the water to kill the larvae. A silicon-based compound called aquatain is also being placed on the surface of the water to suffocate the mosquitoes. One benefit of aquatain is that it is non-toxic and so does not harm the fish or any non-target species. 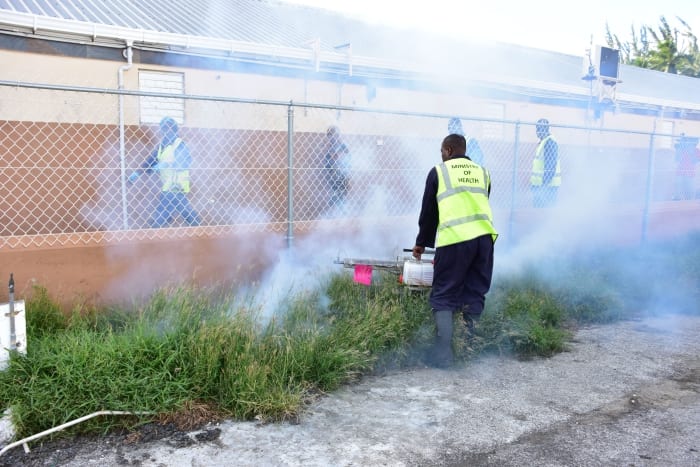 The Ministry of Health also has a labour force stationed at the swamp which is responsible for cleaning canals and removing the algae which grows on the surface of the water. This allows direct sunlight into the water to help with the regeneration of the swamp.

Mr. Chapman revealed that, unlike the Aedes aegypti mosquito, which breeds no more than 100 yards from where it is discovered, the Culex mosquito is capable of flying up to two miles, so that its breeding site may not be near to where the proliferation is seen.

The Environmental Health Department is asking residents and business owners on the south coast who may be experiencing problems with mosquitoes to contact its officers at the Randal Phillips Polyclinic at 428-3324.