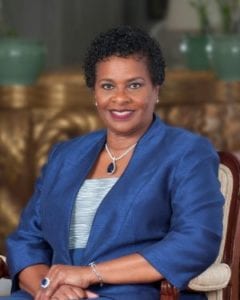 Her Excellency Her Excellency The Most Honourable Dame Sandra Mason, FB, GCMG, D.A, Q.C., LLD, was born on the 17th day of January, 1949 in East Point, St. Philip, Barbados.

Her tertiary level education at the University of the West Indies (UWI), Cave Hill Campus, Barbados and the Hugh Wooding Law School, Trinidad, saw her obtain a Bachelor of Laws (LL.B) degree in 1973 and a Certificate of Legal Education in 1975, respectively. In doing so, she became the first Barbadian female Attorney-at-Law to have graduated from the Hugh Wooding Law School.

In 1998, she completed a course in Judicial Administration at RIPA, London, and a course in Alternative Dispute Resolution at the University of Windsor, Canada and Stitt Field Hendy Houston ADR Ltd. in 2000.

In 2001, she completed a fellowship at the Commonwealth Judicial Education Institute, Canada, and advanced courses in Alternative Dispute Resolution by the University of the West Indies and University of Windsor, Canada.

Dame Sandra began her career as a teacher at the Princess Margaret Secondary School. She left teaching and worked at Barclays Bank DCO, Barbados, and was promoted to Trust Administrator for the period 1975-1976. She was later transferred to Barclays Bank Jamaica Ltd., then returned to Barbados and continued her banking career with Barclays Finance Corporation.

In 1978, she began working as a Magistrate of the Juvenile and Family Court, while simultaneously tutoring in Family Law at UWI following a brief stint as an Attorney-at-Law in private practice. She served on the UN Committee on the Rights of the Child from its inception in 1991 until 1999, serving both as Chair and Vice-Chair.

She was also one of two women who were appointed to the 13-member CARICOM Commission charged with evaluating regional integration.

Dame Sandra also served as Ambassador to Venezuela, Chile, Colombia and Brazil for the period 1993-1994. Upon her return to Barbados, she was appointed as Chief Magistrate and later became the Registrar of the Supreme Court.

On the 1st day of January, 2014, she was the first Barbadian to be appointed as a member of the Commonwealth Secretariat Arbitral Tribunal (CSAT), based in London, England. In 2017, she became the first female President of that tribunal.

She has held membership in various organisations and associations and has chaired or was a member of numerous boards and committees over the years.

With such an outstanding career, Dame Sandra also takes an avid interest in reading, playing scrabble, watching cricket and travelling. However, her greatest achievement is being the mother of son Matthew, who is also an Attorney-at-Law.

On Tuesday, November 30th, 2021, Dame Sandra was installed as the first President of Barbados as the country made the transition to a republic.