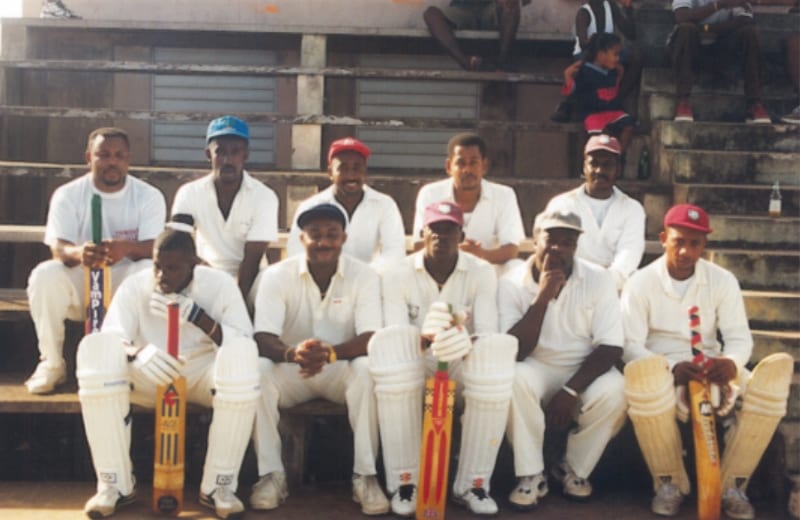 The pavilion in Dash Valley, St. George has been renamed in honour of community stalwart, the late Robert Browne (back row, left). (GP)

In acknowledgement of the contribution and achievements of a local sportsman and icon of the Dash Valley community, the Dash Valley Pavilion, in St. George has been renamed “The Robert Browne Pavilion”.

During an official ceremony held on the grounds of the pavilion, Sports Minister Stephen Lashley, said that his Ministry and the Cabinet of Barbados agreed with the residents and sportspersons from the area who proposed the renaming of the building.

“From all reports [the renaming] is well founded and deserved,” Mr. Lashley commented as he acknowledged the “sterling” and “very meaningful contribution” of Robert Browne to the improvement and growth of the residential districts of Dash Valley, Mount Friendship, Haggatt Hall and Mapp Hill.

Mr. Browne, who was integral to the development of the building of the pavilion, had a “deep-rooted commitment” to the resident cricket clubs of Mapp Hill and Western who used the Dash Valley playing field as their home ground.

The Minister further explained that “model residents such as Mr. Browne are important contributors to nation building and are vital to the social development and fortification of Barbados”.

He charged those persons who will be using the facilities to continue the good work and maintain the facility…”indeed emulate and seek to attain Mr. Browne’s standards as a meaningful contributor, superlative example and community icon.

“While the National Sports Council will do its part, members of the community must guard and protect this wonderful asset zealously, to ensure that the excellence which exists in this community can continue to bear fruit,” Minister Lashley continued.

Mr. Brown died on December 6, 2011. The renaming of the pavilion occurred three years after the initial proposal.