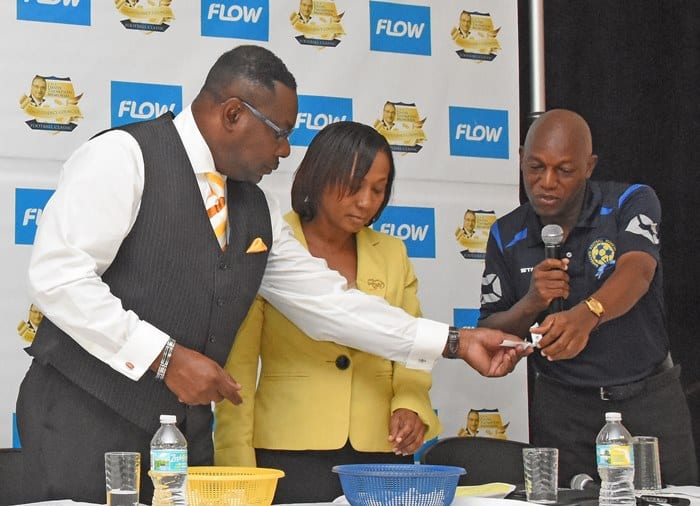 The fifth edition of the David Thompson Memorial Constituency Council Football Classic is slated to begin later this month, with an opening ceremony at the Usain Bolt Sports Complex of the University of the West Indies.

On Sunday, September 18, at 4:00 p.m., the tournament begins with the first two matches between the St. Michael South Central and St. John constituencies; followed by defending champions – Christ Church East Central and St. Michael North West, at 6:00 and 8:00 p.m. respectively.

Speaking at the media launch today, Minister of Social Care, Constituency Empowerment and Community Development, Steve Blackett, explained that while they could not “engage in the flair, pomp and pageantry that we would typically wish to see in this Jubilee year”, they remain committed to hosting and organising the tournament.

The Minister explained that the tournament goes “much further than football”, as it enhances community cohesion and fosters community spirit through the interaction and friendly rivalry among players and spectators from the various constituencies.

“Each year, the tournament commemorates the outstanding commitment of the late Prime Minister, the Honourable David Thompson, to football at the community level and it is seen as a means of social inclusion and social mobility. My Ministry is wholeheartedly committed to ensuring that this competition remains on the national calendar,” he said.

Mr. Blackett also compared the tournament to a “mini stimulus package”, as it gives small vendors and business persons the opportunity to market their businesses and sell their products at the various match locations.

Regarding funding for the tournament, the Minister disclosed that all costs associated with the tournament have been “kept to a minimum”, and will be financed with a $400,000 grant from the Arts and Sports Promotion Fund, managed by the Ministry of Finance and Economic Affairs.

He added that the Ministry was also hoping to receive a sponsorship contribution from last year’s main contributors to assist in defraying this year’s operational costs.

Minister Blackett commended the staff of the Department of Constituency Empowerment and the Barbados Football Association, as well as the referees, coaches, players and other representatives for their dedication and continued support, and anticipates an exciting build-up to the finals of the tournament.