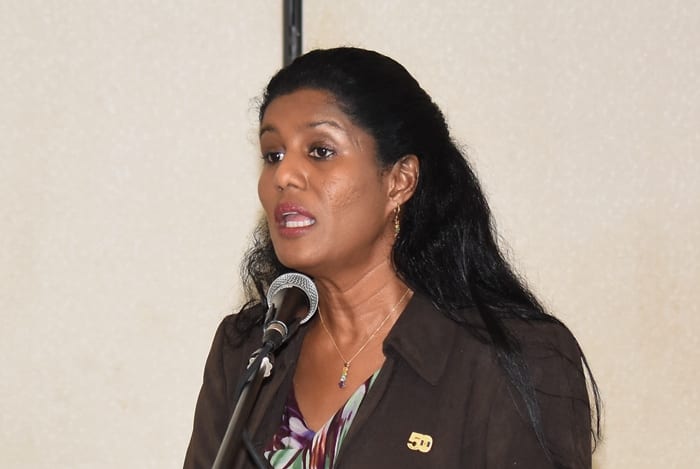 Minister of Labour, Senator Dr. Esther Byer Suckoo speaking at the two-day workshop on the role of Multinational Enterprises in Barbados’ advancement. (C.Pitt/BGIS)

Decent work standards will remain the focus of national development, as Barbados readies itself for an injection of foreign direct investments.

Minister of Labour, Senator Dr. Esther Byer Suckoo, gave this assurance today, while speaking at the launch of a two-day workshop of the International Labour Organization (ILO) and Barbados Employers’ Confederation (BEC), to discuss the role of Multinational Enterprises (MNEs) in Barbados’ advancement.

During her remarks at the Accra Beach Hotel and Spa, Rockley, Christ Church, Minister Byer Suckoo revealed that Barbados had made significant strides since the adoption of the MNEs declaration; and was now transformed to an “upper middle to high income economy” that garnered the interest of investors and hotel chains.

However, even as the island stands poised for further developments in the form of the Wyndham Hotel and the Hyatt Centric Hotel, the Labour Minister stressed that decent work standards must be at the forefront of these projects.

She stated: “While my Ministry welcomes the continued development of our tourism industry…especially in anticipation of the recruitment drive which will take place on these sites, and the possible recruitment of migrant labour as well, I have taken the necessary steps to establish a technical committee.”

This committee, according to the Minister, “would be tasked with the responsibility of developing a protocol to address the conditions that are to be adhered to, in the employment of persons on these sites, both local and foreign”.

Senator Byer Suckoo also added that Barbados has a “proud history” of working to ensure decent labour conditions, which predates the current work standards agenda. She maintained that it was now the responsibility of upcoming employers, to ensure that this precedent remained intact.

“We, therefore, must be vigilant to ensure that the emerging business environment is marked by responsible enterprises that help create employment especially for our youth, … place emphasis on the promotion of decent work, including collective bargaining and the workers’ constitutional right to join the trade union, and enterprises that exercise social responsibility,” the Minister stated.

The two-day workshop will culminate tomorrow, Friday, September 9, with four sessions on MNEs and the decent work mandate.