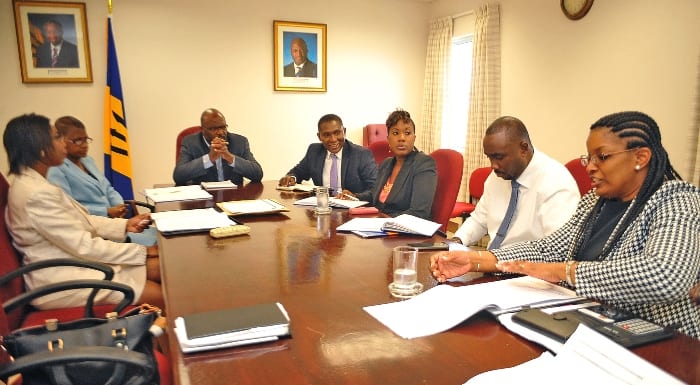 Attorney General, Adriel Brathwaite (head of table) and Barbados’ Ambassador to the United States, Selwin Hart (to the Minister’s left) listening attentively to Manager of the National Council on Substance Abuse, Betty Hunte during a recent meeting at Wildey, St. Michael. (A.Miller/BGIS)

Barbados will not be decriminalising marijuana just because other countries are doing so, without the proper supporting information on its effects.

Attorney General, Adriel Brathwaite, restated his position in the debate on legalising marijuana, during a recent meeting with Barbados’ Ambassador to the United States, Selwin Hart, at his Wildey, St. Michael office.

During the discussion, Mr. Brathwaite said Barbados had just completed its National Anti-Drug Plan, and also made it clear that Barbados “will not, and should not jump ahead” to decriminalise marijuana without proper dialogue.

“I am not an advocate of the decriminalising of small quantities because we do not know what we would be encouraging young people to put into their bodies,” he stated.

He was supported in this view by Manager of the National Council on Substance Abuse, Betty Hunte, who stated that the issue went beyond decriminalising marijuana, and involved a look at how it impacted the body at a later date.

.“Chronic marijuana use is something that we have not grappled with as yet. We have the breathalyzer [test], but there is nothing to measure the saturation of marijuana in the blood,” she explained.

However, Mrs. Hunte noted that recent statistics showed that more people were also being treated for poly drug use and not marijuana alone.

Despite this, she noted that Barbados had made significant strides in its fight against illegal drugs, particularly through assistance from the Inter-American Drug Abuse Control Commission (CICAD).

She said CICAD was advocating for the establishment of an observatory on drugs. “CICAD is trying to help Caribbean countries standardise how data is collected,” Mrs. Hunte said, noting that a treatment protocol to standardise collection was already done in four Caribbean countries.  She explained that it allowed stakeholders to see the trends of those seeking assistance.

Mr. Hart noted that CICAD was “very beneficial to Barbados”, and appeared to be a priority area which he would have to defend to ensure that it received the necessary strengthening in order to continue its work.