Deeper Partnerships In The Community 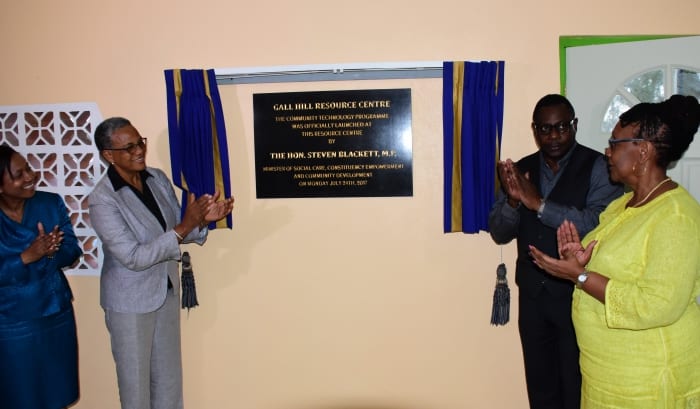 From left to right: Permanent Secretary in the Ministry of Social Care, Janet Phillips; Member of Parliament for St. John, Mara Thompson; Minister of Social Care, Steve Blackett; and Chief Community Development Officer, Patricia Hackett-Codrington, at the unveiling of a plaque to commemorate the launch of the Community Technology Programme at the Gall Hill Resource Centre on Monday. (C.Pitt/BGIS)

There is a promise from this country’s Minister of Social Care, Steven Blackett, that communities across Barbados will “come alive with a wave of cultural expression” that would see greater partnerships through recreational and cultural activities.

He gave this assurance on Monday while addressing a ceremony at which the Gall Hill Community Centre in St. John was renamed the Gall Hill Resource Centre.

Mr. Blackett said that not only would meaningful partnerships be formed, but this renewed cultural expression would also facilitate social cohesion, inclusion and productivity through a wide range of social and recreational and cultural activities.

Tracing the historical evolution of social activities, the Minister said the Moyne Commission Report of the 1930’[s cited the need, among other recommendations, to establish recreational facilities in the island that would provide a space for the working class to meet and engage in social and developmental activities.

“Out of this recommendation, early community development activity was born and this [Gall Hill Community Centre] would have been one of the many centres established across Barbados. Over the years, it has served this area well in its former state. Additionally, several advances have been made in Barbados as policies and programmes have been implemented in order to develop our communities and our country as a whole,” Mr. Blackett stated.

The Social Care Minister urged residents to bring their ideas for programming to the resource centre “so that together this community can shine”.