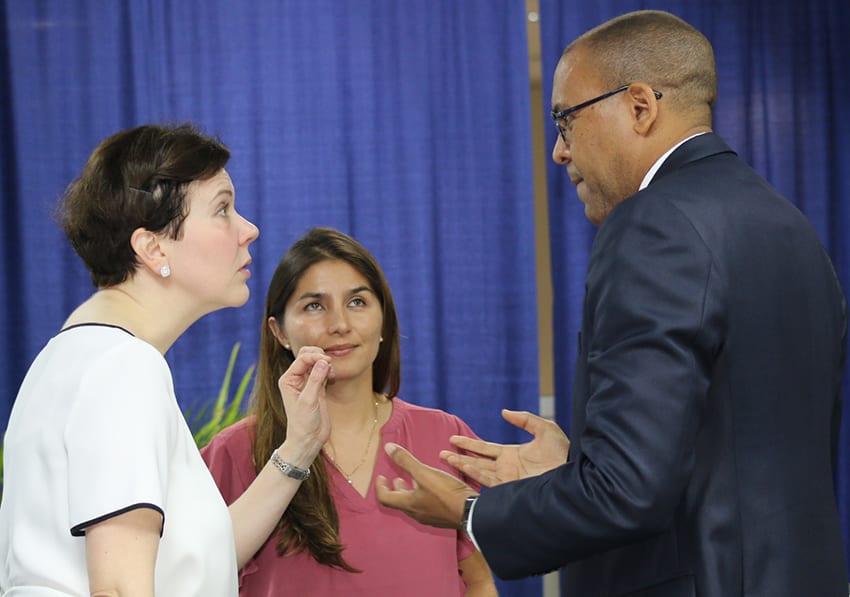 Minister of Tourism and International Transport, Kerrie Symmonds in discussion with representatives of MasterCard at the Lloyd Erskine Sandiford Centre. (Photo courtesy of Barbados Today)

An electronic portable payment machine may soon be available to roving and small business persons in the tourism industry.

Representatives of MasterCard Inc. unveiled the palm-sized device in Barbados recently, and Minister of Tourism and International Transport, Kerrie Symmonds, believes “it will bring our vendors into the 21st century”.

He said the linkage between tourism microbusinesses and the financial sector had been neglected for too long, and called the device “an essential link”.

Minister Symmonds explained that coconut vendors, beach vendors, taxi drivers, watersports and rental chair operators would be able to accept credit and debit card payments using the device on the spot, with the aid of a blue-tooth cellular phone.

Funds would then be sent directly to the vendors’ bank accounts, and by manipulating the device and a mobile app, they could also send electronic receipts to customers.

“Those individuals are micro business people, legitimate business people conducting a commercial enterprise in their own right…. They are in danger of being excluded from the financial system as we move towards a society that is increasingly cashless….

“They are all part of the Barbadian experience and the Barbados product, but if a visitor says I don’t have money on me, all I have is a credit card, there must be an opportunity for those people doing legitimate commercial activity [to capitalize],” he said. 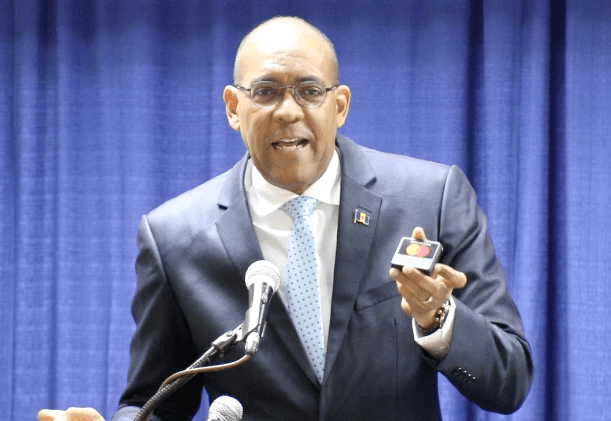 The Tourism Minister also pointed out that globally, visitors were travelling with less cash and warned that vendors could be left financially disenfranchised, and Barbados could lose the chance to earn additional foreign exchange.

“[If] that microbusiness person loses an opportunity to make a little money, the country loses the chance to make a little foreign exchange.  We have to make sure that we are sufficiently inclusive, to keep our microbusiness people as part of the supply chain, so that their services, commodities or goods are seen as equally valuable for sale as any other commercial transaction taking place in a multi-million-dollar investment on Broad Street.  They are no less legitimate, and I refuse to accept that they be treated in a less legitimate manner,” the minister asserted.

He added that the device would also be advantageous to vendors as commercial banks would now have a record of their business transactions, and this would make it easier for vendors to access loans and other services from such financial institutions.

Representative from MasterCard, Irina Fulcher, also said that the cash-less system would encourage millennials to return to the island, and prevent both vendors and tourists from possible robberies.

It is hoped that following town hall meetings and consultations with the vending community, that the project would commence in July 2019.

Similar projects have successfully been implemented in The Bahamas and Jamaica.