Diplomatic Corps Have A Vital Role 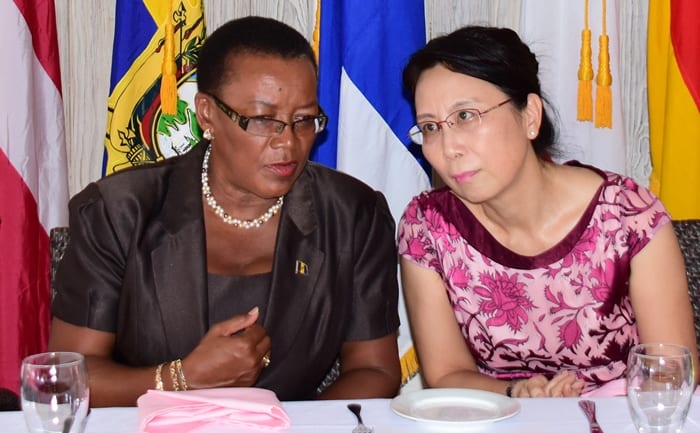 The role of the Honorary Consular Corps and the Diplomatic Corps is still relevant, and they have an important contribution to make despite significant global challenges that have major implications for how Barbados engages at the bilateral and multilateral levels.

This reminder came last Friday from Minister of Foreign Affairs and Foreign Trade, Senator Maxine McClean, as she addressed a luncheon hosted by the resident Honorary Consular Corps, at Southern Palms Hotel.

The Minister was addressing the topic: Consular and Diaspora Diplomacy: Catering to a Discerning Clientele in a More Complex World.

Emphasising the importance of the Corps in bilateral engagement and in ensuring connections with the diaspora, Senator McClean said: “I want to express the deep appreciation of the Government and people of Barbados to all members of the Honorary Consular Corps for the valuable contribution you have been making to fostering excellent bilateral relations between Barbados and the many countries you represent.

“In your capacity you engage on an ongoing basis with the Ministry of Foreign Affairs and Foreign Trade. Those of you who made Barbados your home are not only serving your respective countries well, but you have also been making significant contributions to the economic and social development of Barbados and for this I say thank you.”

Members heard that the very dynamic global environment in which they now lived, with economic, social and technological developments, had brought significant changes to lifestyles, business practices and generally how nations engaged with one another. This was said to have also contributed to the evolution of the roles, functions and importance of the Honorary Consul.

“No longer do you just facilitate the issuance of passports and visas or respond to emergencies associated with nationals of the countries you represent.

The complex and competitive nature of the global environment; the almost universal adherence to international instruments, especially in the areas of human rights; and an expanded definition of security, all serve to make the work of the Honorary Consuls more important and diverse,” the Foreign Affairs Minister noted. 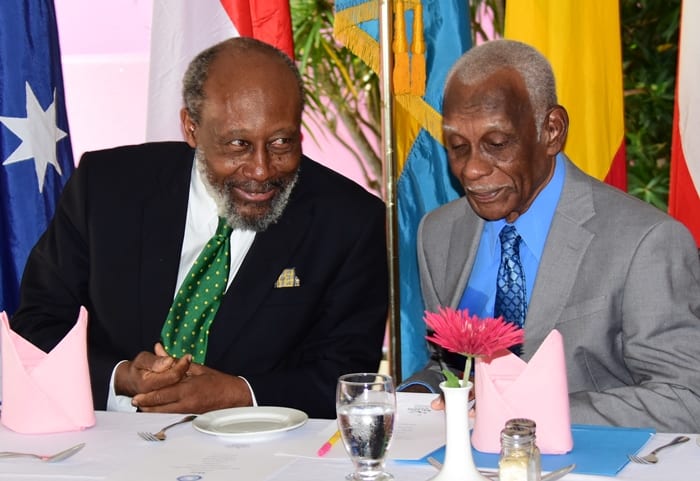 Honorary Consul for Mexico, Senator, Sir Trevor Carmichael, (left) and Dean of the Honorary Consul, Selwyn Smith, in discussion at the luncheon. (C.Pitt/BGIS)

Efforts at engaging the Barbadian diaspora was a key highlight of Senator McClean’s presentation and she reminded the group that as a small island state, migration had been a part of Barbados’ history, almost from its very beginnings. She said it was common to find our nationals in some of the remotest parts of the world living, working or sometimes merely visiting.

“We have come to recognise their role in shaping the image and reputation of our country.  The Barbadian diaspora has long been recognised as an important element of our relationship to the rest of the world. Thus, since 2008, this administration has developed a set of strategies to engage and support our citizens abroad.

“A critical mechanism for doing this is the Honorary Consular Corps at home and in the jurisdictions in which our people can be found,” she pointed out, recalling when Barbados was negotiating a Double Taxation Agreement in Qatar, the person to facilitate the officer was a Barbadian geologist living there at the time.

Senator McClean disclosed that the Ministry of Foreign Affairs and Foreign Trade was working assiduously to formulate a database to capture the vast network of Barbadians in the diaspora.

“I am of the view that the diaspora could potentially unlock one of Barbados’ richest reservoirs of investment and promote sustained economic growth in the future.  As members of the Corps, you have the capacity to promote and influence dialogue, stimulate trade and investment and of course, your extensive network connects you to some of the world’s most vibrant and emerging markets. We rely on you to assist us in supporting our diaspora and those residing in the countries you represent.”

The luncheon was also attended by Heads of Mission and other diplomatic representatives, including China’s Ambassador to Barbados, Wang Ke.

In recognition of this, Senator McClean said it signalled there were many opportunities for collaboration between the diplomatic and honorary consular personnel that could be mutually beneficial.

The presence of so many Honorary Consuls here in Barbados, she stressed, was both an important symbol and signal that Barbados was still a leader in the Caribbean and western hemispheric space.

She further acknowledged that, though small, the island had a proud legacy of political stability; adherence to the rule of law; and well-established institutions that facilitated commercial enterprise. 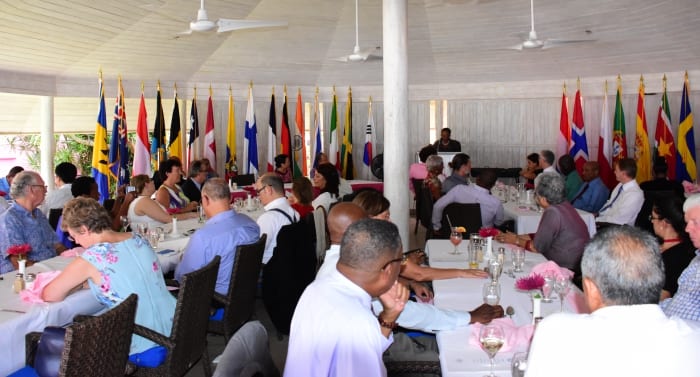 Members of the Honorary Consular and Diplomatic Corps at a luncheon at the Southern Palms Hotel. (C.Pitt/BGIS)

She further acknowledged that, though small, the island had a proud legacy of political stability; adherence to the rule of law; and well-established institutions that facilitated commercial enterprise.

It was also noted that despite some recent economic challenges, the island remained a vibrant destination for tourism, investment and the provision of financial services.  Maintaining it was for these reasons that influential Barbadians and others were highly sought after by foreign Governments as local representatives, Ms. McClean stressed that Barbados was open to engaging prospective international partners in its pursuit of sustained economic development, and Honorary Consuls had a significant role to play in this respect.

“And, most importantly, we have concluded with that country a Double Taxation Agreement, which I must also report was negotiated and concluded in record time,” she remarked.

The Honorary Consular Corps is made up of both nationals and others who have made Barbados their home.  Within the ranks of the resident Honorary Consular Corps, there is a cadre of representatives who have distinguished themselves in business, civic life and international relations, including professional ties, in some instances with the Ministry of Foreign Affairs and Foreign Trade.