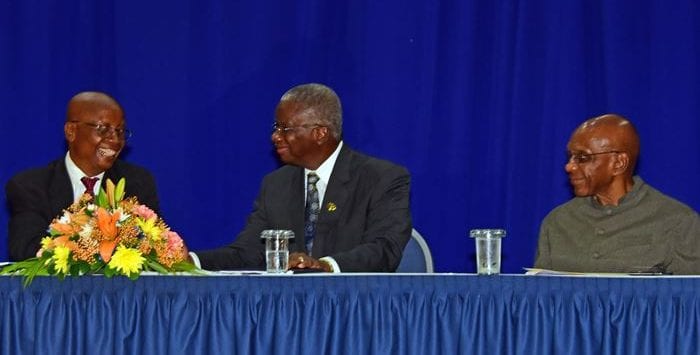 Barbados’ draft National Energy Policy will be reviewed by Cabinet and should soon be presented to the public for discussion.

This disclosure came today from Prime Minister Freundel Stuart, as he delivered the feature address at the opening of the two-day Sustainable Energy Independence in the Caribbean: Making It Happen Conference, at the Lloyd Erskine Sandiford Centre.

Mr. Stuart said this country’s Energy Road Map, which the Division of Energy had engaged a company to prepare, has confirmed the local analysis that there could be “an exponential increase” in the renewable energy penetration level in the electricity supply.

He pointed out that since 2010 Government has continued the process of providing generous concessions for this sector by the inclusion of the generation of electricity from renewable energy sources, as well as energy efficiency.

“We intend to provide further concessions to the sector by significantly lowering the annual licence fees for those entities which wish to sell electricity to the grid.  The Cabinet has already agreed to this proposal and the requisite regulations will shortly come into effect,” he stated.

Mr. Stuart stressed that the Caribbean could no longer afford to expend billions of dollars every year on the importation of fossil fuels.

Such importation, he opined, undermined the region’s competitiveness, and resulted in Governments not having the resources or policy space needed to give greater attention to important areas such as health and education.

“We can no longer afford to have some of the highest electricity rates in the world, which in some cases are five times higher than what exists in industrialised countries,” he insisted.

He reiterated that Government’s vision was for Barbados to become a 100 per cent renewable energy island within the next 50 years, based on the use of indigenous local renewable energy sources.

“On the way to achieving this goal, we now comfortably expect that a target of 65 per cent of peak electricity capacity can be achieved by 2030, taking into account the suite of investments which have been and will be undertaken within the next few years,” he pointed out.

Mr. Stuart said Government would continue to import natural gas in the form of Liquefied Natural Gas to augment declining indigenous gas production, in the near and medium term, as it continues on its way to realising Barbados’ goal of becoming a 100 per cent renewable energy island.

The two-day conference is being hosted by the Barbados Renewable Energy Association in association with the Central Bank of Barbados.