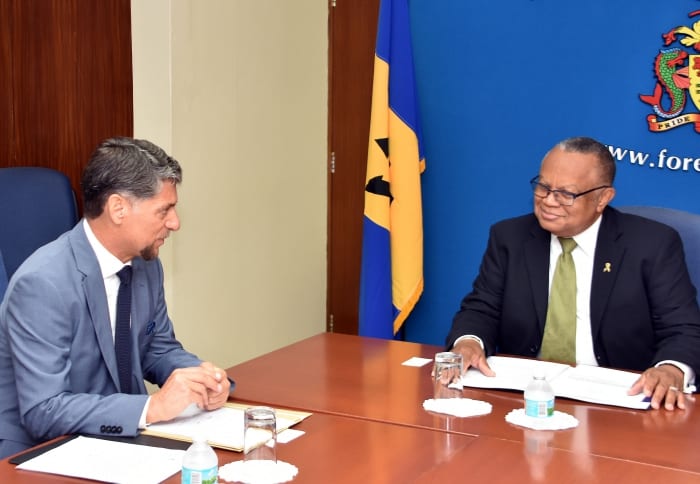 Barbados and Argentina are examining the possibility of developing a programme aimed at enhancing the skills of teachers to teach English and Spanish as a second language.

This was discussed today when Ambassador of Argentina, Gustavo Martinez Pandiani, paid a courtesy call on Minister of Foreign Affairs and Foreign Trade, Senator Dr. Jerome Walcott, at the Ministry on Culloden Road, St. Michael.

Senator Walcott emphasised that Barbados cherished its “excellent” relationship with Argentina and assured the Ambassador that Government would continue to work at strengthening bilateral relations.

Noting he felt strongly about getting Barbadians to be bilingual, the Foreign Affairs Minister said given the close proximity of Latin America to the island, Spanish was an obvious choice.

In turn, Ambassador Martinez endorsed the prospects for training exchanges and technical cooperation between both countries to enhance Spanish speaking skills in Barbados and English in Argentina.

Other matters discussed included cultural activities to celebrate 50 years of relations between Barbados and Argentina; double taxation; an Air Services Agreement; and bilateral cooperation in agriculture and fisheries.

This year Barbados and Argentina mark 50 years of diplomatic relations, having established ties in August 1968.