District In St. John To Be Renamed

Prime Minister Freundel Stuart has hinted that a district in St. John is to be renamed to honour noted trade unionist, the late Horatio Cooke.

Speaking at the launch of the book, Of Halls, Hills and Holes: Place Names of Barbados, authored by Sir Woodville Marshall, the Prime Minister said that the signatures received and the research carried out in support of the renaming had left him in no doubt “that no violence is going to be done” (to our history) in renaming this particular district.

He, however, accepted a caution given earlier by Sir Woodville that such decisions should not be made lightly, and Mr. Stuart suggested that perhaps in future the historians should be consulted so that errors were not made.

He described the new publication as “a great leap forward for Barbados”, and added that the text would help Barbadians to better understand themselves and the forces which shaped them as individuals, as well as Barbados as a nation.

Noting that the majority of place names in Barbados reflected the names, activities and interests of the colonial class which influenced the decision-making process for most of the island’s history, Mr. Stuart argued: “We shouldn’t want to change that because that is our history. There is no difference between the naming of Hastings and the presence of Nelson. To erase all of that would be to take us from the realm of fact and to lead us to a position where we have our feet planted firmly in the air and not on the ground.” 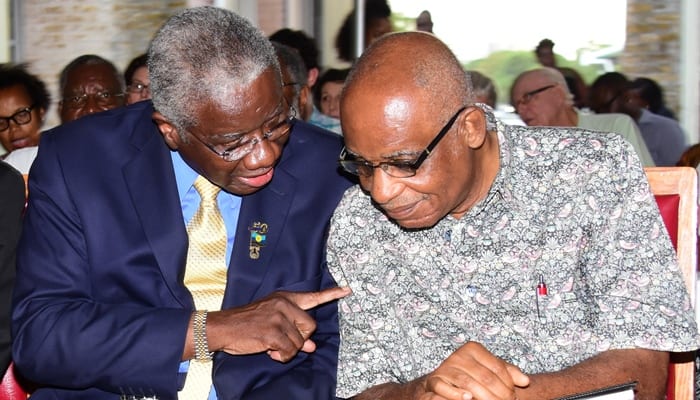 He noted, however, that over time, the naming process has been changing.

“The Nigerian novelist, Chinua Achebe, observed on one occasion that until the lions get their own historians, the story of the hunt is always going to glorify the hunter. And for the better part of Barbados’ history, we have not had our own historians so our history has always tended to glorify the colonisers and what they were doing.

“Over the last 45 years or so, fortunately, we have been able to gather on to ourselves a stellar collection of historians who are prepared to look through our lenses and see reality through our eyes.”

Numbered among them, he told the audience, was Sir Woodville, whose work he described as being “of imperishable value in terms of helping us to understand ourselves and to create our relevance in the historical process.”

Mr. Stuart maintained that over time and particularly since the 1930s, the Barbadian society had become more democratic than at any other time in its history and this was reflected in the naming process.

“We have been trying to reflect the interests of the broad mass of people in Barbados within our naming process, as is witnessed in what is happening in the naming of our schools and a number of our buildings,” he pointed out.

Prime Minister Stuart thanked Sir Woodville for his commitment to the six-year project.