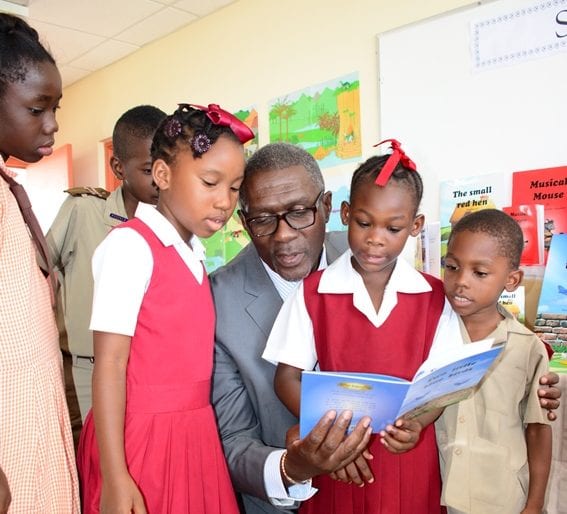 The generosity of philanthropists who continue to donate to education was again applauded by this island’s Education Minister, Ronald Jones, who has linked it to the island’s high achievements.

This came today as Mr. Jones addressed a handover ceremony of several reading materials to primary schools across the island, at Blackman and Gollop Primary School, Staple Grove, Christ Church.

Expressing gratitude to Dr. Elizabeth and Hans Grundin, directors of United Kingdom-based Early Literacy Resources and sponsors of the items, the Education Minister stressed that Barbados had to be doing something which warranted this assistance.

He acknowledged that the nation had been achieving much even in the midst of economic crises here and in the rest of the world.

“More and more statistics are being brought forward to demonstrate Barbados’ position in the world, in its human development indices and this is outstanding even in the midst of the crush where you don’t have large amounts of money….Our indices tend to be quite high,” he noted.

It was pointed out too that the Barbados’ education system was just last year ranked ninth in the world out of over 200 countries and Mr. Jones called this “a phenomenal achievement”.

He intimated that the donation and the recent BDS $10 million in technology from China had to be as a result of the country’s high levels of achievements. And, it was disclosed that other donations of a technological nature were in train to further enhance schools.

Mr. Jones explained that the Grundins were retired educators who had spent many years researching in the UK, Canada and the United States and had a passion for early childhood development which led them to create the Solar Learning series of books.

These, he explained were based on the authors’ philosophy that “in early education, sound and language are vital supports for reading with a focus more on learning than on teaching”.

The books, which were presented to several primary school principals and teachers, provide content for children ages three to seven, cover early childhood and development period and can be used for older children experiencing delays in their literacy development

The Education Minister said he hoped that the reading materials would be used to support the literacy programmes in schools, as they were suitable for inclusion in classroom libraries for students to engage in classroom reading, as well as for teacher-led shared reading and guided reading activities.