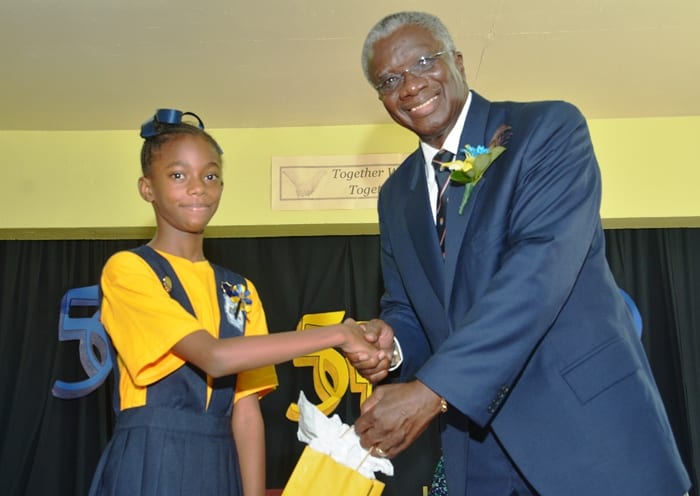 Prime Minister Freundel Stuart receiving a gift from head girl of St. Bartholomew’s Primary, Janae Jordan-White during a visit to the school today. Mr. Stuart addressed students on the topic ‘A day in the life of a Prime Minister’. (B.Hinds/BGIS)

Prime Minister Freundel Stuart has urged students not to lose sight of their own independence.

Addressing primary school students at St. Bartholomew’s Primary School this morning, Mr. Stuart stated that it was possible for us to lose our independence by not being good citizens and being well informed about the various institutions across the island.

Speaking on the topic: A Day in the Life of a Prime Minister, Mr. Stuart stressed that in order to succeed in life, there were certain guidelines that one should follow.

“Not being responsible in your behaviour; not being respectful to those who are put in authority over you; not understanding the importance of hard work and sacrifice to get the things that you want; and not understanding that there is nothing really called a short cut.  And, even though you may try to use short cuts, in the long run a short cut becomes a very long road and you can’t use short cuts unless somebody has you under some kind of control,” the Prime Minister advised.

Stating that if enough people in a society fell short in terms of their behaviour, Mr. Stuart pointed out that even though that society may call itself independent, it was not, because independence ultimately meant freedom to be responsible in every area of your life.

He told teachers and students that from a young age he had to understand “very basic things”.

“From early on, I learnt that honesty is the best policy; that you should always speak the truth and speak it outright.  As my mother use to tell me ‘cost it what it will, he who hides the wrong he does, does the same thing still’.   I had to understand, as my mother also told me, that I should not compare myself to others.  I should not look at what other people are doing and to allow what they are doing to influence me,” he continued.

The Prime Minister also told students to set their own goals, to have confidence in themselves and to take their lives into their own hands.

“Understand yourself; get to know your country. For example know who your National Heroes are…  Also, make it your business to learn something new every day.  Even at this stage in my life, I make it my business to read and learn.  If at the end of the day I haven’t learnt something new, then I don’t go to sleep until I do,” he maintained.