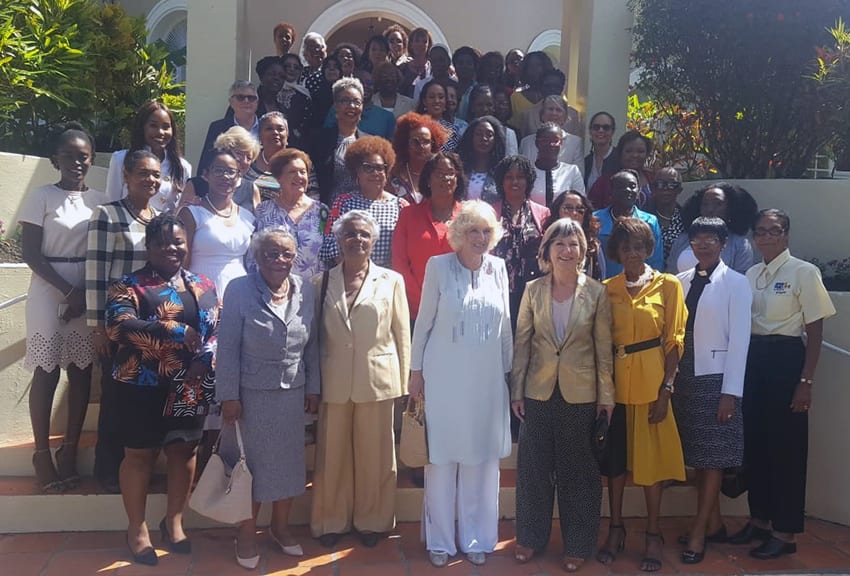 Her Royal Highness, The Duchess of Cornwall, was delighted to have met several outstanding Barbadian women yesterday at Ilaro Court, including Prime Minister Mia Amor Mottley and Dame Billie Miller.

The Duchess, who was on her first official visit to Barbados with her husband, Prince Charles, was at the official residence of the Prime Minister attending the Women of the World (WOW) Think-In, an event held in her honour, and as a tribute to her as President of WOW. Those in attendance included Senator Lisa Cummins; Cultural Ambassador and entertainer, Allison Hinds; and Special Envoy for Persons with Disabilities, Rosalind Hurley.

Stating that it was her pleasure to have met with these leaders and other women at the height of their careers in the political, social, cultural, economic and other spheres, Her Royal Highness said: “I am delighted to meet you all today. It is really a pleasure to have talked to so many remarkable ladies.  I wished I had a longer time, but there is not a lot of time on these trips.  They don’t allow for a lot of time for interaction…. I see some of the women in Barbados seem to be very powerful.  They have powerful jobs and are also doing brilliant jobs here.”

The Duchess also said she was “very, very proud of WOW”, and noted that the organization had its origins in a conversation started by its founder, Jude Kelly.

Adding that WOW had taken off in several countries across the world, including Australia, Ghana and Nigeria, she said: “People seem to be taking more and more interest…. It is all about the empowerment of women in these countries and it is about everybody, every class, every colour, every village, and getting together for a joyous celebration, where we have these festivals where all these women can discuss their problems, their anxieties and where there is help.”

Dame Billie Miller, who had earlier introduced the women to the Duchess of Cornwall said: “They represent an excellent cross-section of our society – women who have distinguished themselves over a very broad sweep of professional, business and many other sectors in our economy, both in the civil service and in the private sector.  All signs suggest…that this trend is continuing, I’m pleased to say.  And, I think it’s fair to say that Barbadian men are supportive of the increasing gender balance in our population.”

Founder of WOW, Jude Kelly, acknowledging the myriad interests of the Duchess, which include domestic violence, vulnerability of women and girls to ensuring “girls have a voice” said: “That’s why we joined forces.  I started WOW nearly 10 years ago because I wanted girls and women to feel that we have a right to celebrate who we are and where we’ve gotten to.”

Emphasizing that women had to help the next generation of girls and women, she lauded Barbados’ extraordinary history of women in leadership posts and encouraged the country’s involvement in WOW.

“WOW is celebratory.  It is also great. WOW is now in 20 countries across five continents, but this place for celebration and activism is needed everywhere,” Ms. Kelly said, as she recounted how WOW was encouraged to come to the Caribbean through several persons, indicating: “Well go to Barbados, they know what they are doing there!”

Tags: Royal Visit 2019, The Duchess of Cornwall, Women, Women of the World, WOW