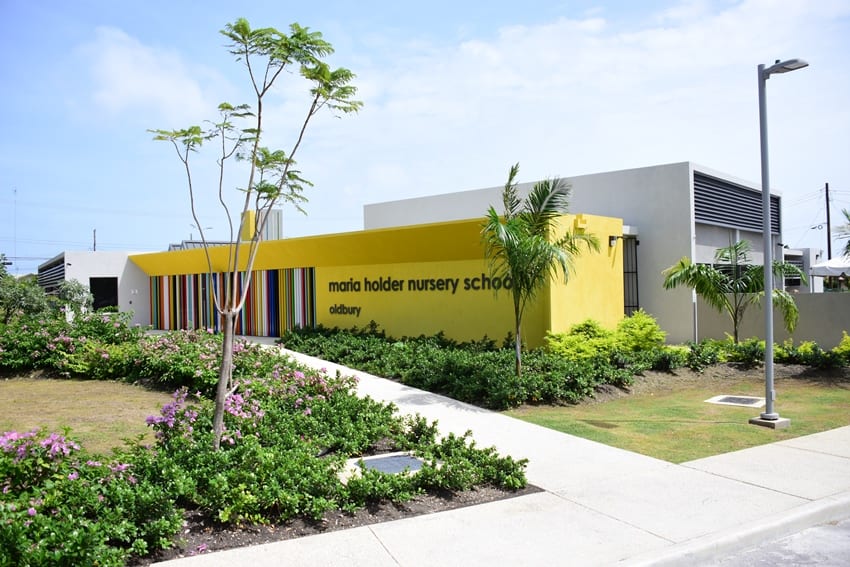 The outside of the newly opened Maria Holder Nursery School. (C.Pitt/BGIS)

Another state-of-the-art school has officially opened, with Education Minister Ronald Jones lauding the generosity of The Maria Holder Memorial Trust and extolling the strides made in early childhood education since the1960s.

Maria Holder Nursery School, Oldbury, as it is called, currently houses 72 pupils, a figure which is expected to move to 90 come January. Its presence has now brought the number of accessible government nursery schools to 12, an achievement which the Minister believes the country can be proud of.

Mr. Russell also pointed out that education was a “fundamental” objective of the Trust and the construction of schools was their greatest project to date.

Mr. Jones, in commending chairman and co-founder of the Trust, Christopher Holder and his board of trustees for their benevolence, said: “I am pleased to note what has evolved. These are extremely well-constructed and well-maintained schools.”

Stating that the Trust had shown “deep commitment” to the island, he urged that they be applauded for also putting money behind the training of nursery teachers even up to the graduate level, clearly alluding to the recent graduation of 60 teachers from postgraduate programmes with Wheelock College, Boston, funded in part by the Trust.

“Your foray into physical construction and infrastructural provision has moved into the provision of quality teachers to satisfy the needs of our little ones,” the Minister remarked. 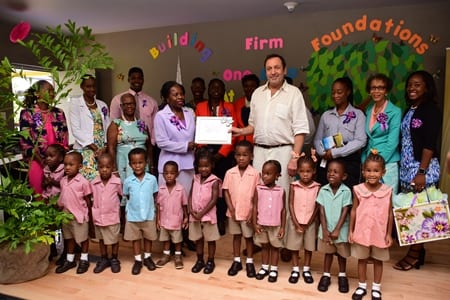 While outlining a brief history of nursery school education in Barbados, Mr. Jones, a former teacher, himself, recalled the first public one opened was Erdiston Nursery, in the Pine, St. Michael, in September 1965, followed by Government Hill Nursery in 1972; Eden Lodge Nursery in 1975; and St. Stephen’s Nursery in 1993.

Acknowledging others who also contributed to this early impetus, he saluted the philanthropy of the Jaycees for donating Government Hill and Eden Lodge Nursery Schools, offering access to children three to five years old.

Elaborating further, he said: “Not that it has shifted emphasis from primary, secondary and post-secondary and tertiary education but it is because of this deep recognition and the heavy enunciation in the Millennium Development Goals, as part of the UN/UNESCO global initiative on education, moving persons into literacy and numeracy through 15-year development plans, and now into the Sustainable Development Goals, which started in 2015 and have 15 years to 2030.

The Minister then assured staff at the Oldbury institution that his Ministry would continue to develop the curriculum and work with early childhood educators to ensure the existence of a quality environment. 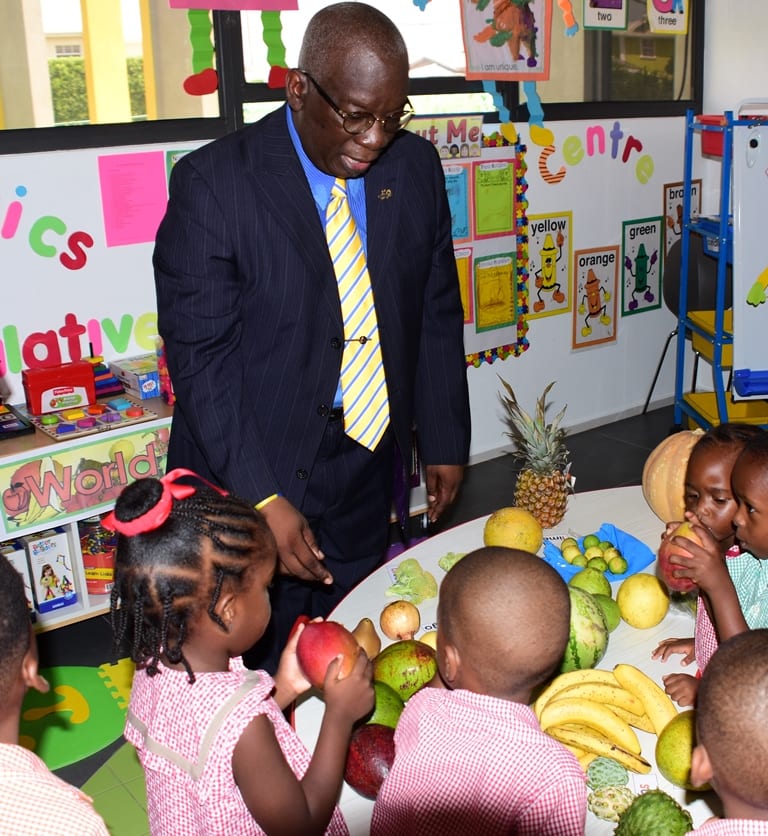 Minister of Education, Ronald Jones goes back to the classroom as he interacts with the students of the newly opened Maria Holder Nursery School. (C.Pitt/BGIS)

Praising teachers for the display of talent at the event, he said it was important that families had the ability to nurture their children at an early age, from the cradle to the grave, and that there be educators to continue the journey of building firm foundations.

Government, he stressed, continued to place emphasis on early childhood education in order to provide children with the opportunity to grow, develop and contribute significantly to the nation.

While adding that Government was also adamant that no child should be deprived of an education, regardless of his/her station of life, he said: “All of our children should have the opportunity to be part of a proper, quality, learning environment and this is part of that social agenda that we have always practised in Barbados.”

Three-year-olds attending the Maria Holder Nursery School, Oldbury have at their disposal all developmental materials and equipment required for building fine and gross motor skills; promoting cognitive development, including literacy and numeracy skills; as well as for aiding their social and emotional learning skills.

The school also boasts a modern playground on the outside, indoor play areas and housekeeping centres allowing pupils the opportunity to hone their dramatic skills and dress in character.

Moreover, through the use of Ministry-issued laptops in the six classrooms, early childhood educators can easily plan lessons and incorporate other technology (for example projectors), adding to the school’s thrust for a total hands-on approach to instruction.