Jovan Linton, who sat the exam at 10, received 99 in both Mathematics and English and an “A” in Composition, with a total score of 243.18 A. He will enter Queen’s College in September.

Tishani Jordan of Christ Church Girls’ is the top girl. She received 100 in Mathematics, 99 in English, and an “A” in Composition with a total score of 243.70 A.  She too will head to Queen’s College.

These were among the results disclosed earlier today by Minister of Education, Science, Technology and Innovation, Ronald Jones, during a media briefing at the Elsie Payne Complex that discussed the performance of students in the exam.

The Minister also noted that four males and nine females topped the Mathematics with a perfect score of 100.  They were Miguel Barker of Milton Lynch, Nathaniel Cavallin of Providence; Jovani Gittens of St. Gabriel’s and Johnathan Jackson of The Rock Christian.

The females were Abigail Christie of The Rock Christian; Shaniah Graham of West Terrace; Vanessa Greenidge of Charles F. Broome; Yeva Jones of People’s Cathedral; Tishani Jordan, Ayana St. Hill, Hindsbury,  Shania  Thomas of Charles F. Broome; and Shannon Vaughan of St. Gabriel’s. In the area of English, Choiselle Joseph of Leacock’s Private was the only student to score 100. 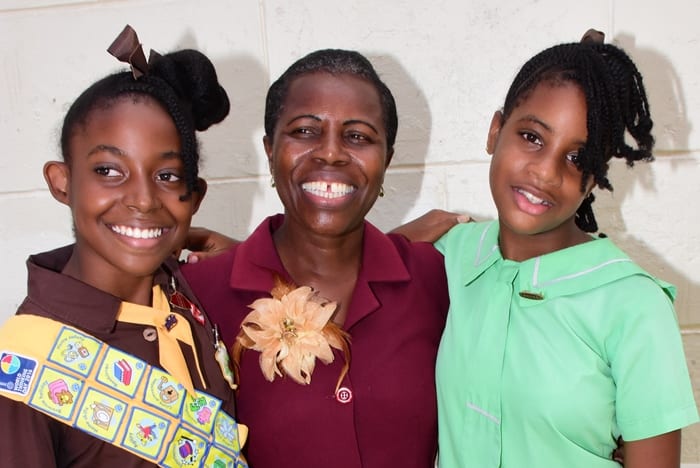 Mr. Jones noted that 3,216 students wrote the 2017 BSSEE, and this was a decrease over the last five or six years, where in 2012 the figure was 3,970. Attributing this to declining birth rates on the island, he said: “And, this is being reflected in the number of students who at age 10 Plus or 11, have been writing the exams. It is being felt throughout several schools.”

He said 93.5 per cent of the 3,216 students had been allocated to public secondary schools and the others would be given bursaries or allocated by the Ministry. However, the Minister noted the education system had not yet been able to eliminate students receiving zero and there were particular and peculiar reasons which would be examined.

Making mention of the 13 “early sitters”, Mr. Jones said they performed “exceptionally well” and had been successfully placed.  Congratulating all students, he also said: “Let us hope that it continues; let us hope that parents, students and teachers see the benefits of education and really doubling down, really committing themselves to learning, to improving overall and to seeking to work together for the benefit of all our children.”

It was also stressed that all secondary schools were “equipped to encourage and foster good learning” and once students opened themselves to quality education and parents gave the necessary support, there would “be an explosion all around in the quality of student learning and student behaviour overall”.