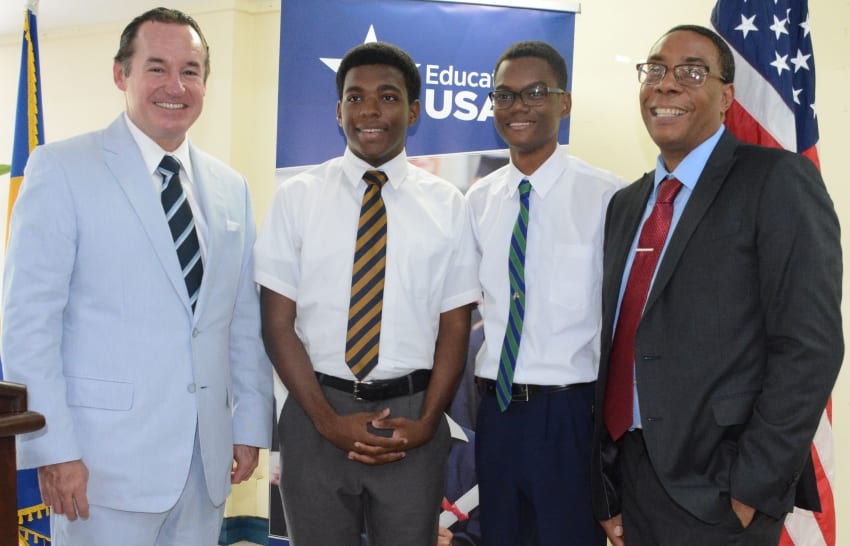 Secondary school students seeking to explore opportunities to study overseas are now better positioned to do so, with the opening of the EducationUSA Advising Centre at the headquarters of the National Library Service in Independence Square.

At this morning’s launch, Minister of Creative Economy, Culture and Sports, John King, explained that the new venture would be instrumental in providing greater accessibility to the information needed for secondary school students.

It would help them to make more informed decisions regarding opportunities to attend accredited colleges and universities, which are best suited to their needs, skills and goals.

In giving some background to the initiative, Mr. King said that EducationUSA is a United States Department of State network of over 400 international advising centres in more than 170 countries.

“The principal goal of these advising centres is to promote United States higher education around the world by offering unbiased, comprehensive and timely information about educational opportunities in the United States and to give guidance to qualified individuals on how best to access those opportunities,” he stated.

The advising centre at the National Library Service will operate at the standard level of approximately 20 hours a week, and will concentrate its efforts on outreach among secondary school students to heighten their awareness of the US higher education opportunities.

It has been outfitted with the requisite reference materials, such as books, software, visual presentation materials and other equipment, which were provided by the Embassy of the United States, and will be used during the weekly advising sessions.

Minister King also pointed out that there would be a dedicated member of staff to assist persons visiting the centre. He announced that Loleta Parris was selected to serve as the EducationUSA Advisor, having completed the requisite training.

It will allow her to ably guide students through a range of topics related to the US higher education system, such as the admissions process; standardised testing requirements; the student visa process; and preparing for departure to the United States.