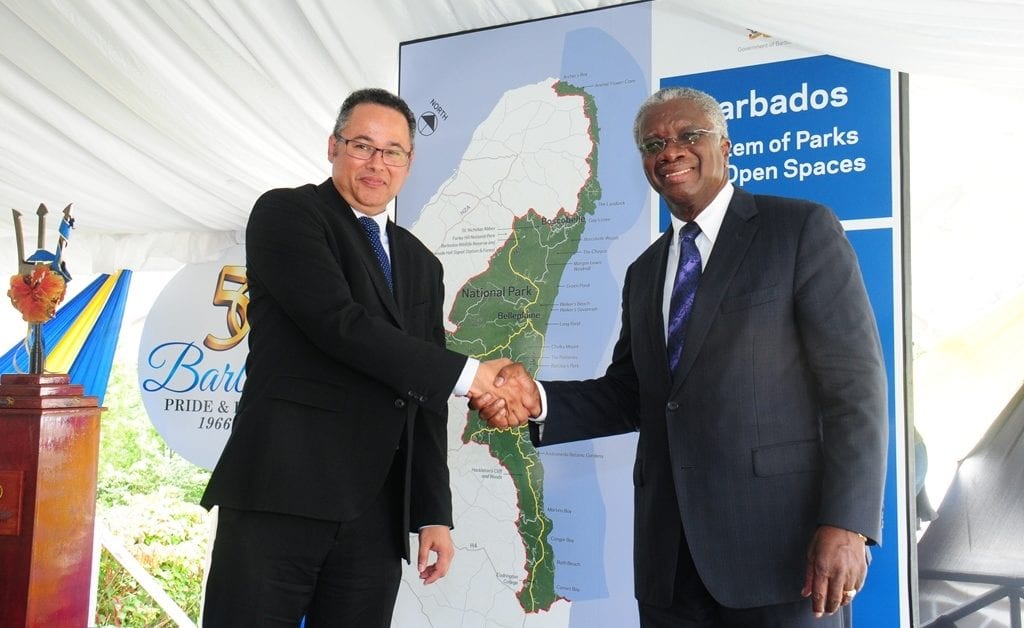 Prime Minister Freundel Stuart has described as “limitless” the economic potential from the proper implementation of the Barbados System of Parks and Open Spaces.

While delivering the feature address today at the launch of the system at the Natural Heritage Department in St. Thomas, Mr. Stuart said persons would be able to derive economic benefit from rural tourism, craft industries, environmentally-sensitive farming, fishing activities; conservation projects, including reforestation; amenity and community upgrading projects, touring and guiding.

The Prime Minister gave the assurance that Government remained committed to the sustainable development path this island has taken.

“If the true potential of the green economy is to be realised, adequate human and financial resources will need to be directed to the implementing agency to allow for the National Park to be fully developed, and for this we will need partnerships with other stakeholders in the private sector and civil society, and indeed those in the Social Partnership,” he suggested.

The identification, recognition and preservation of these special spaces started in 1977, when Government announced that it would establish a National Park.

Its boundary extends from Archer’s Bay, St. Lucy, to Conset Bay, St. John, and incorporates inland areas such as the Flower Forest, St. Joseph; and Welchman Hall Gully, Jack-in-the-Box Gully and Harrison’s Cave in St. Thomas. The National Park comprises 7,300 hectares or 17 per cent of the island’s total land area, which is nearly twice the Caribbean average of 9.6 per cent.

Mr. Stuart pointed out that Government’s policy of allocating more than 10 per cent of the island’s land mass to conservation, in the Barbados National Park, shows the importance which this country places on ensuring that its development is in concert with the preservation and protection of its natural heritage.

He promised that Government would continue to ensure that a harmonious relationship was maintained between the Ministry of Environment and the communities that were a part of the National Park.

“It is only through the persistent and consistent engagement of all stakeholders, at all levels, that we will be able to achieve our education, preservation and conservation goals. We recognise that people will come and go, but the communities will remain, and therefore we must be focused and proactive in our engagements with the communities, if we are to achieve our goals,” Mr. Stuart stated.

The Prime Minister also thanked the Barbados Light and Power Company for agreeing to sponsor the first three gateway signs to the National Park.