Getting Students Back To Combermere A Priority 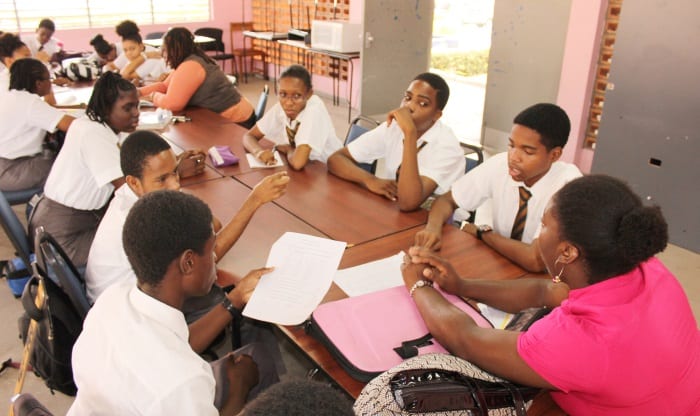 Getting Combermere students back to school from tomorrow is a priority for the Ministry of Education, Science, Technology and Innovation.

This was declared today by Parliamentary Secretary in the Ministry, Senator Harry Husbands, following a near two-hour tour of the Waterford, St. Michael institution.

The tour party comprised Ministry officials and a team of experts, who assessed the compound and undertook remedial work there; members of the Barbados Secondary Teachers’ Union (BSTU); and media representatives.

Acknowledging that he could not give assurance that all the issues were finally resolved, Senator Husbands said: “But, I am satisfied that all the work that has been done will put us firmly in the right direction.”

He expressed gratitude, on behalf of the Ministry, to the team of experts, past Combermerians and others, who volunteered to undertake the remedial work. He also noted the input of the Ministries of Education and Labour, staff, students and parents of the school.

“We know that the students and teachers of the school have gone through some challenging times recently.  We too sympathise with their plight but problem solving is like that; you attempt one thing that does not work; you attempt another, and we keep going at it till we resolve the issues,” he said.

The role played by the BSTU was also recognised, with the Parliamentary Secretary adding that it was their role to insist on the maintenance of the rights of their members. “They too have performed their role and I look forward to, as we have planned, the [Combermere] school opening for work tomorrow,” he stated.

Queried about the maintenance of other school plants, in light of the work done at Combermere, Senator Husbands remarked: “The issue really is, as the country has been discussing in recent times, not only of schools but of all government buildings. I think it is a challenge. We are discussing with the Education Project Implementation Unit of the Ministry, and the staff and administration of Combermere, the development of certain protocols for cleaning, especially during the vacation times, and especially during the summer times.

“The work that has been done here, what we identified needs to be done will [all] form the backdrop for similar protocols throughout the entire teaching service,” he stated.

Working with students to ensure they caught up with school work was also a question posed to the Parliamentary Secretary. While pointing out that the Ministry was approaching things in stages, he remarked: “I think we want to get the children back in school tomorrow, have them settled over the next couple of days, and then I am sure we will be able, working along with the parents and the BSTU, to come up with a reasonable position to assist students and assist them further in their preparation for their various exams.”