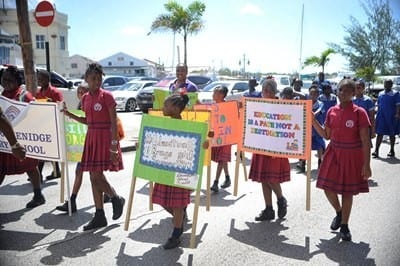 The Education March and Parade. (FP)

Over 3,000 students and teachers from primary, secondary and tertiary institutions, as well as officials from the Ministry of Education, will participate in the Education Parade and March tomorrow, Friday, October 7.

The event is part of the activities to mark Education Month, and will start at Queen’s Park and move throughout Bridgetown from 9:30 a.m. to noon.

Its objective is to draw the public’s attention to the important role which education plays in personal and national development, and to celebrate the achievements of the various educational institutions in Barbados.

The Education March also forms part of the Ministry’s celebrations to mark Barbados’ 50th Anniversary of Independence. Minister of Education, Science, Technology and Innovation, Ronald Jones, will deliver remarks at the opening ceremony in Queen’s Park.