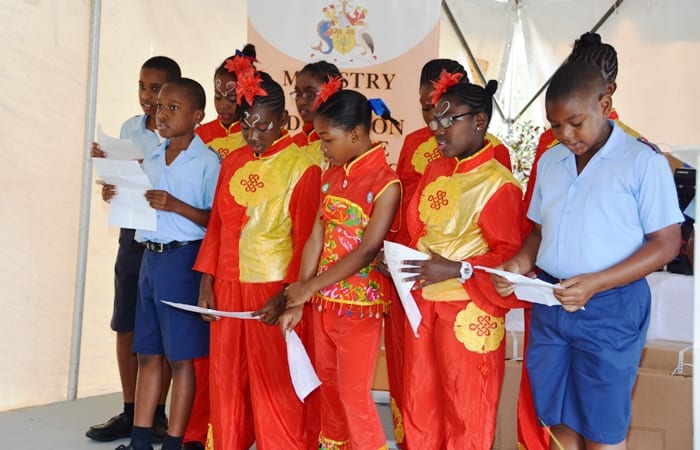 Students performing at the handover ceremony of teaching material from China to Barbados at the Ministry of Education’s Elsie Payne Complex today. (B.Hinds/BGIS)

The over BDS $10 million in teaching material handed over recently by the People’s Republic of China to the Government and People of Barbados is significant in more than one way.

Prime Minister Freundel Stuart underlined this in his address to those gathered at the hand-over ceremony, at the Ministry of Education’s Elsie Payne Complex headquarters. Included among these were China’s Ambassador, Wang Ke; and Minister of Education, Science, Technology and Innovation, Ronald Jones.

Acknowledging that the gifts had other significance, Prime Minister Stuart said: “When we speak of the productive sectors of our economy, we like to think that we are talking about those sectors like tourism and agriculture and manufacturing that produce things. Tourism produces money for us; agriculture produces food, manufacturing produces things.

Explaining that this was why Government had invested as heavily as it had, over the last 56 years or so, in education at the primary, secondary and tertiary levels, Mr. Stuart pointed out a “virtual revolution” was taking place at the nursery level, in that the nursery sector was in the process of being built out with the assistance  of the Maria Holder Trust.

“We believe that education is the most important productive sector in Barbados, and we have indigenised, made local, our assessment of the students in our educational system whether they are at the nursery, primary, secondary or tertiary levels,” the Prime Minister stated.